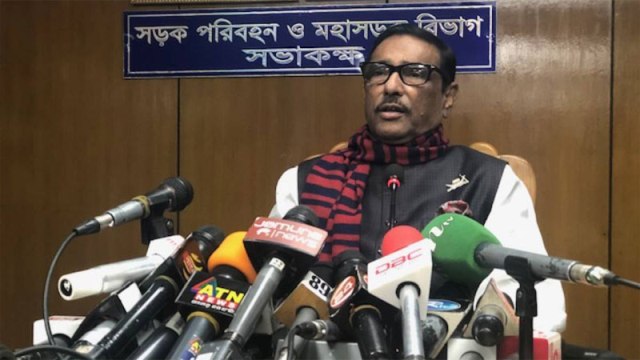 Online Desk : In the wake of coronavirus outbreak in China, Road Transport and Bridges Minister Obaidul Quader on Wednesday said 35 Chinese citizens working under the Padma Multipurpose Bridge Project have been kept under close observation.

Talking to reporters at his Secretariat office, the minister also said 35 Chinese nationals involved with the Padma Bridge project returned to Bangladesh since January 18 enjoying their leave, and they have been left out of the project activities.


Replying to a question, whether the work on the construction of the Padma Bridge will be hindered following the coronavirus prevalence in China, Quader said around 1,000 Chinese citizens haven been working under the project, and about 150 of them usually remain on ‘shifting leave’ at a time.

“It doesn’t hamper the construction activities of the Padma Bridge,” he added.

The minister said around 35 Chinese citizens working for the Padma Bridge project have so far returned to Bangladesh from their country since January 18. “They’ve been kept under observation in addition taking precautionary measures. They’ve been kept out of project duty. But our activities aren’t being interrupted in any way for that,” Quader told the journalists.

He said those workers will return from China will be left out of project activities for 14 days as per the rules.


Wuhan, the capital of Hubei province of China, is at the centre of the outbreak of the coronavirus. Wuhan is in lockdown and China has imposed travel bans on a number of other cities.

The Chinese health authorities announced on Wednesday that 5,974 confirmed the cases of pneumonia caused by the novel coronavirus had been reported in 31 provincial-level regions by the end of Tuesday.

A total of 132 people have died from the disease, state-run Xinhua news agency of China reported.

The coronavirus can be passed between humans through close contact, Chinese medical experts say.