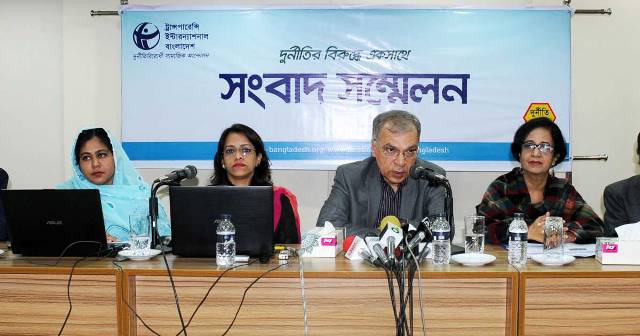 Online Desk : Highlighting various irregularities and corruption in every sector of Rajdhani Unnayan Kartripakkha (Rajuk), Transparency International Bangladesh (TIB) on Wednesday said the government organisation and its activities are synonymous with corruption.

“It’s now believed that Rajuk and corruption are synonymous. Rajuk couldn’t even become a public-friendly institution…they failed to discharge their responsibility of a governing body. They also failed to protect DAP and DMDP. By institutionalising irregularities and corruption, Rajuk has now deviated from its original role,” said TIB Executive Director Dr Iftekharuzzaman.


He made the remarks while talking to reporters at a press conference marking the launch of a report titled ‘Rajdhani Unnayan Kartripakkha (Rajuk): Challenges to good governance and ways to overcome’ at the TIB Dhanmondi office.

The study monitored and reviewed Rajuk’s various legal limitations and enforcement, institutional constraints and irregularities, accountability, transparency in the delivery of information, and irregularities and corruption in project approvals.

The TIB executive director mentioned that the organisation has become a profitable business enterprise instead of fulfilling the duty of a regulator.

“The role of profitability in the name of development activities and that of a regulator must be separated. Since the business mentality of Rajuk doesn’t seem to be changed as a result of prolonged practice, a completely separate, neutral and effective authority should be established to ensure transparency and accountability in the overall operation of the Rajuk by making appropriate amendments to the law,” he said.


The data from the report supports his statement as estimates from the period of 2014-2015 to the financial year of 2017-2018 show that Rajuk’s surplus income varies from 25.3 percent to 60.1 percent per fiscal year.

However, there is a shortage of Rajuk’s ability to properly implement budget plans as the amount allocated is not spent fully.

The report also shows that since the approval of the Detailed Area Plan (DAP) in April 2010, it was revised 158 times till April 2018. It was alleged that DAP is defending the interests of developers, real estate businessmen, politicians and other influential people by changing the class of land through a tripartite dispute.

There are various irregularities and corruption in Rajuk’s clearance and design approval, according to the study.

For example, in most cases, additional money is taken than the fixed rate for a service through a tripartite agreement between Rajuk officials, brokers and service-seekers. At the time of the survey, there are allegations of non-contractual payments.

At the individual and real estate developer-levels, it ranges from Tk 2,000 to Tk 5,000, the report said.

Individuals need to pay Tk 15,000-80,000 for a clearance certificate while the amount varies from Tk 1 lakh to Tk 10 lakh at the developer level, it said.


Service-seekers are forced to pay the prescribed fee in addition to the fixed one for receiving the approval of a building design.

In the case of a large or special project, the amount of bribe from the real estate developers can range from Tk 15 lakh to Tk 20 lakh, according to the study.

According to the Civil Charter and the rules, the designated time limit for design approval is 20-45 days, but it is alleged that it is not maintained properly.

The report mentioned about allegations where design approval of projects take 2-3 years although usually the design is to be approved within four months.

However, if the amount of money is high, the work is done within the stipulated time, the report reveals.


According to data obtained from the study, Rajuk has no enough manpower as 40.1 percent of its 1980 posts are vacant. The rate of working women is only 9.7 percent and allegations of irregularities and corruption also exist in recruitment, promotion and transfer.

The TIB put forward a 14-point recommendation, including timely reforms of laws and regulations, formulation of necessary policies and guidelines and formulation of timely and comprehensive laws in coordination with existing ones, to bring a change in the government organisation.