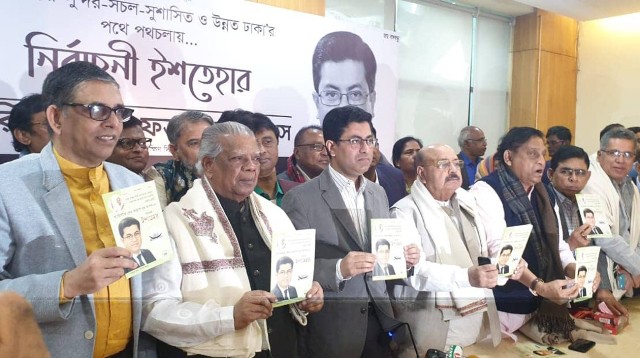 Announcing the manifesto at a press conference at the Awami League central office at Bangabandhu Avenue in the city, Taposh promised to maintain the heritage of historic old Dhaka and said he will implement all the development programmes under a master-plan which covers overall development of the city.

In his manifesto, the AL mayoral candidate highlighted the need for freeing the Buriganga and Shitalakkha rivers from all illegal encroachment and bringing the rivers back to life.

He said area-based ‘Panchayat’ will be formed to ensure good governance and availability of civic services for the citizens and also pledged to conserve and protect the historical monuments and establishments of old Dhaka and beautify the city.


As per his priority agenda, Taposh said if he is elected he would take steps to ensure the basic amenities for the city dwellers within the first 90 days.
Taposh said he will take a plan for development of city slums and bring the slum dwellers under social safety net. Urban health and family planning will be ensured all citizens including the slum dwellers and Dhaka central jail (old) will be transform into an attractive tourist zone, he added while announcing the election manifesto.

AL President Abu Ahmed Monnafi were also present, among others, at the press conference.