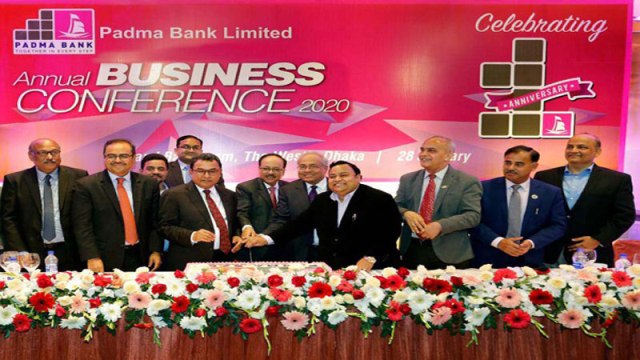 Online Desk : Finance Minister AHM Mustafa Kamal hopes that Padma Bank Limited would be listed in the country’s stock market within the next one year as the bank has already passed its first one year successfully.

“Just a year after, Padma Bank was re-launched under a new name and it gained trust of its clients with new saving products,” he said while speaking as the chief guest at the first anniversary and annual business conference of the Padma Bank at a hotel in the city on Tuesday, said a press release on Wednesday.

Chairman of the bank Chowdhury Nafeez Sarafat presided over the function.

Kamal said the prime asset of a bank isn’t its cash, rather trust of its clients and Padma Bank has achieved that trust. “I hope, the bank will come in the stock market within the next one year,” he added.


Nafeez Sarafat thanked the bank’s clients for keeping their faith on the bank and for injecting new deposit.

He said the bank will take different programmes for celebrating the birth centenary of Father of the Nation Bangabandhu Sheikh Mujibur Rahman.

Ehsan Khasru highlighted the first year’s achievements of Padma, saying the bank has turned around from its difficult days two years ago.


He said Padma Bank has already launched new application software — Padma Click, Padma Digi, Padma I Banking and Padma Wallet — in an effort to make banking easier for the clients.

“Our Advance Deposit Ratio (ADR) is now better than two years ago. Also by 2020, we want to bring down the bank’s ADR to less than 100 percent,” he said.