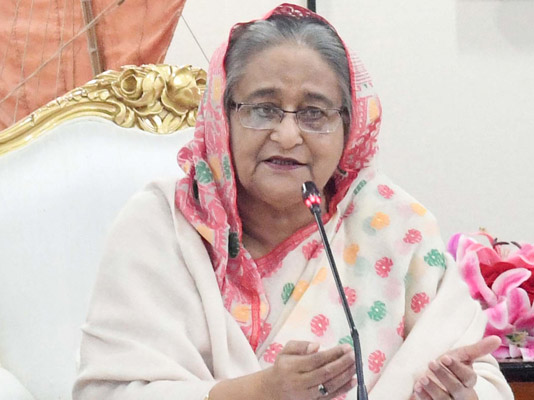 National Desk : Prime Minister Sheikh Hasina today advised youths to use their talents in creating employment opportunities instead of seeking jobs, expecting the “Mujib Year” to be marked for generating employment for all.

“It will not be wise to sit idle awaiting jobs . . . you (youths) have to be capable enough to create employment opportunities instead of running after jobs,” she said while distributing the National Youth Award, 2019 at her office here.

The premier asked the youths to utilize their innovative ideas, talents, efficiency and strengths for expanding the country’s job market.

Sheikh Hasina handed over awards to 22 self-employed youths and five youth organisers in recognition to their contributions towards generating employment for themselves and others.

As many as 445 self-employed youths and organisers have so far been awarded with the accolade since its inception from 1986.


The premier came with the opinion that none will remain jobless in the country if the youths have self-confidence and self dignity.

She said that youths should develop themselves with a mindset of not running after the jobs rather to generate employments as the government has set a target that none will remain unemployed marking the “Mujib Year”.

The premier added: “(Think) what should you (youths) do for yourselves and for others and bear in the mind that you will not do any job rather to create employment for others.”

In this context, she said, “There was a mindset in our country that one will be treated as unemployed as he didn’t do jobs.”

Referring to some examples, she said the people of the country still do not think that freelancing is a job despite the freelancers can earn huge money.

“This mindset should be changed,” she opined.

She asked the youths to capitalize the multilateral scopes which have been created by her government for generating employment and promised to do everything for the youths.


The premier simultaneously called upon the youths to stay away from terrorism, militancy, narcotics and corruption, saying, “You should prevent the menaces. We have to build a secured society where the people can live peacefully and can take the country forward further.”

Director General of the Department of Youth Development Akhtaruz Zaman Khan Kabir was also on the dais.

Atikur of Kalai Upazila in Joypurhat developed a fisheries and livestock farm after getting trainings from the local office of the Department of the Youth Development.


Now the capital of his farm stands at over Taka 5 crore and some 115 workers are now employed in the farm.Spelling out various measures taken by her government for creating jobs, Sheikh Hasina said, “We have created employment for two crore people since assuming office in 2009.”

The premier urged the youths to initiate business after taking loan from the Start Up Fund, saying, “We have allocated Taka 100 crore as Start Up Fund (in the budget) as part of the move to create entrepreneurs.”

In this context, she said her government has been setting up 100 economic zones across the country which will create huge employment opportunities.

The premier said her government has taken massive measures incorporating sports and culture for the overall development of the youths as Father of the Nation Bangabandhu Sheikh Mujibur Rahman wanted to develop themselves as educated and strengthened ones.

In this context, she said her government’s target is to make the youths as efficient work forces.

Stressing the need for imparting the youths with appropriate training, the premier said that they have taken measures under various ministries to arrange training for the youths as they could create employments for themselves and others.


Besides, the government has also wanted to send trained and efficient workers abroad, she added.

The premier said her government is set to start giving technical education to students from class six.

The premier said her government has been working to reach urban amenities to each of the villages.

“We have been working to reach the benefit of the Liberation War to each home with turning the country into a developed and prosperous one free from hunger and poverty as dreamt by the Father of the Nation,” she said.

Sheikh Hasina earlier witnessed a power point presentation on the master plan of the Training Institute to be constructed at Dhamrai of Dhaka for the National Security Intelligence.

Chief architect of the Department of Architecture A S M Aminur Rahman highlighted key features of the plan through the power point presentation.