Boost for Setien as Messi leads Barca rout over Leganes 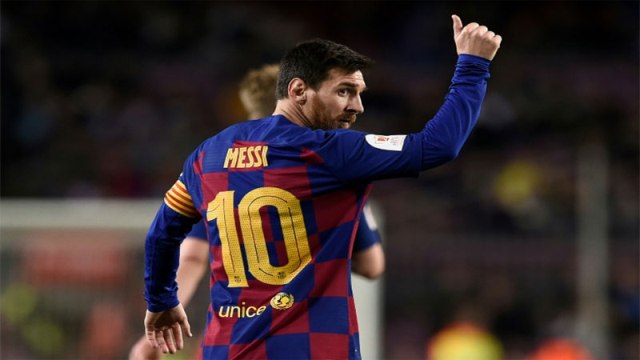 Sports Desk : Lionel Messi scored twice as Barcelona hammered Leganes 5-0 on Thursday to advance to the quarter-finals of the Copa del Rey and deliver a much-needed boost for new coach Quique Setien.

Messi’s double, as well as goals from Antoine Griezmann, Clement Lenglet and Arthur Melo rounded off an emphatic win at Camp Nou, where Barca successfully bounced back from Saturday’s surprise La Liga loss away at Valencia.

“We did a lot of things well but I am not completely happy because we also lost control of the game in the latter stages of the first half,” said Setien.

Defeat at Mestalla allowed Real Madrid to pull three points clear at the top of the league and put early pressure on Setien, who replaced Ernesto Valverde as coach earlier this month.


His appointment will be judged on performances in the league and Champions League this season but Barca have a rich recent history in the Copa del Rey, which they have won in four of the last five years.

They will be in Friday’s draw for the last eight but Sevilla will not after they fell to a shock 3-1 defeat away at Segunda side Mirandes. Real Madrid, Valencia, Real Sociedad, Granada, Villarreal and Athletic Bilbao complete the list.

A home tie in the last 16 against La Liga’s bottom club always looked a kind route back to winning ways for Setien’s side, whose next four league fixtures now include Levante, Getafe and Eibar, all at home, as well as a trip to Real Betis.

Victories in those games would give Setien momentum but performances will be important too given his arrival was as much about changing Barcelona’s style as their results.

After a ponderous display against Valencia, they outclassed Leganes, who pressed high from the start, despite early indications suggesting this Barcelona team might struggle more against opponents that sit deep.

Before the game, the Catalans’ club director Guillermo Amor ruled out buying another striker before the end of the January transfer window on Friday, meaning Griezmann is likely to step into the role of the injured Luis Suarez down the middle.


“There may be a risk of injuries but I have confidence in the players I have,” said Setien. “It wasn’t to be and that’s fine with me. We have to think about what we have and we are happy because in a few weeks we will have Dembele back too.”

Griezmann made his case by opening the scoring after four minutes as Nelson Semedo cut back for the Frenchman to control and poke home his 13th goal of the season.

Another Griezmann strike was ruled out shortly after, only for Lenglet to head in Messi’s corner at the near post to put Barcelona two up after 27 minutes.

Messi made it three after springing in behind just before the hour and then Arthur Melo, on for Griezmann, added another, banging in after both Ansu Fati and Messi had been denied.

Leganes were finished but Messi had one more goal left in him as he latched onto Ivan Rakitic’s pass and rounded Pichu Cuellar, before finishing for his 19th of the season and third under a relieved Setien.

Sevilla’s defeat to Mirandes, who sit 10th in the second tier, was the biggest shock of the round. Matheus Barrozo scored twice before Alvaro Rey put Mirandes out of sight. Sevilla’s Nolito scored a late consolation.