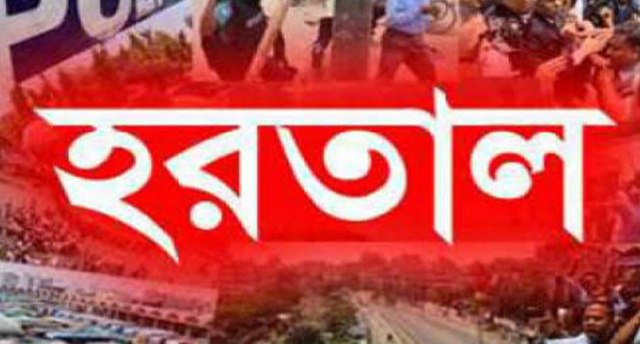 National Desk : Rejecting the results of the elections to the two Dhaka city corporations, BNP has called a dawn-to-dusk hartal in Dhaka for Sunday protesting ‘massive vote frauds.’ BNP secretary general Mirza Fakhrul Islam Alamgir made the announcement at a press conference at the party’s Nayapaltan central office on Saturday evening.
With Fakhrul’s such announcement, the hartal culture in Bangladesh is going to stage a comeback after nearly five years since April 5, 2015.


The BNP leader said their hartal his also meant for registering their party’s protest against the ‘massive vote rigging and frauds and stampeding the people’s verdict by force. He hoped that the city dwellers will observe the hartal peacefully and thus cooperate with their party to ‘restore’ democracy.

Fakhrul said ambulances; hearse, medicine and food shops will remain out of purview of the hartal. He said the election results of the two city polls reflected the government’s announcement, proving BNP’s fear about the credible election true. “The government controlled the election using the state machinery and the Election Commission as they did during the previous polls.”

Fakhrul said the government has destroyed all the democratic institutions with an aim to establish a one-party rule. “The election process has been destroyed while the Election Commission is being used as a weapon of the government. We think it’s never possible to hold a fair election under Awami League. BNP standing committee members Khandaker Mosharraf Hossain, Moudud Ahmed, Mirza Abbas, Dr Abdul Moyeen Khan, Nazrul Islam Khan, Selima Rahman and Iqbal Hasn Mahmud Tuku were, among others, present.


Meanwhile, Awami League mayoral candidates took lead in both Dhaka North City Corporation (DNCC) and Dhaka South City Corporation (DSCC) in the counting of votes in the elections to the two city cities on Saturday. According to unofficial results, AL mayoral runner Sheikh Fazle Noor Taposh got 278,193 votes while BNP’s Ishraque Hossain polled 142,975 in 713 centres out of total 1,150 in DSCC.

Earlier, balloting in the DNCC and DSCC elections ended at 4pm amid ‘low voter turnout’ and reports of sporadic violence and allegations of BNP agents being driven out of polling stations. BNP last announced countrywide nonstop blockade on January 5, 2015 and it continued until April 4, leaving at least 120 people, including policemen dead, mostly in firebomb attacks.


BNP chairperson Khaleda Zia announced the programme as police barred her from coming out of her Gulshan office to join an anti-government rally over the first anniversary of 10th parliamentary election. The BNP chief stayed her Gulshan office since April 4 that year as the blockade programme was on. Amid the blockade, the party and the 20-party alliance also enforced hartals in different phases. They called a 45-hour hartal on March 30 for the last time demanding ‘restoration’ of democracy and people’s voting right.