Fingerprint mismatch forces CEC to use NID card to vote 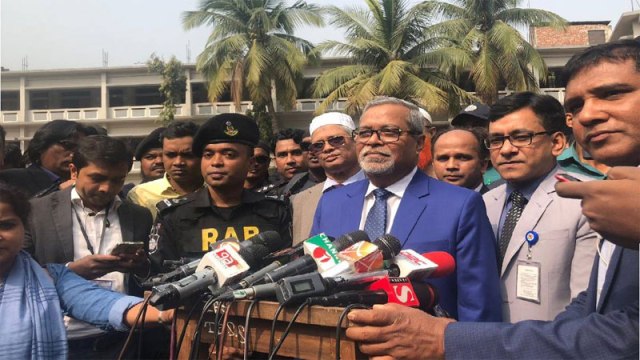 Later, he had to use his National ID card number to cast his vote as the elections to Dhaka south and north city corporations are being held using the EVMs.

Nurul Huda went to IES School and College polling station at Uttara around 11:15am as he is a voter of Dhaka North City Corporation (DNCC).


Later, the CEC gave the election officers concerned his NID card who allowed him to vote by registering his number on the machine.

Contacted, CEC’s personal secretary AKM Mazharul Islam told UNB, “Sir [EC] first tried to match the fingerprint twice by giving his thumb impression. As it was mot matching, he later used the NID card for completing the process to avoid the waste of time.”

He said the CEC’s fingerprint might have matched had he made more attempts, but he used the NID card to save time.

Nurul Huda voiced satisfaction over the overall atmosphere of the Dhaka city election.

When his attention was drawn to BNP’s allegation that their agents were being driven out of polling centres, he said: “Polling agents driven out of voting centres should go to the presiding officers, magistrates and law enforcers and enter polling stations with their help.”

About the overall situation, the CEC said the voter turnout is poor till now.


“I’ve visited another polling centre where the voter turnout is also low,” he said. “People’s response to EVM is positive. Those who’ve faced difficulty in exercising their franchise through EVM are learning about it at the centre.”

Replying to a question about reports of bomb blasts at some polling centres, CEC Huda said the law enforcers were asked to take action instantly.

“But we’ve no information of attacks carried out in different polling centers. I just learned it from you,” he said. “We’ve taken necessary steps to hold the election peacefully.”