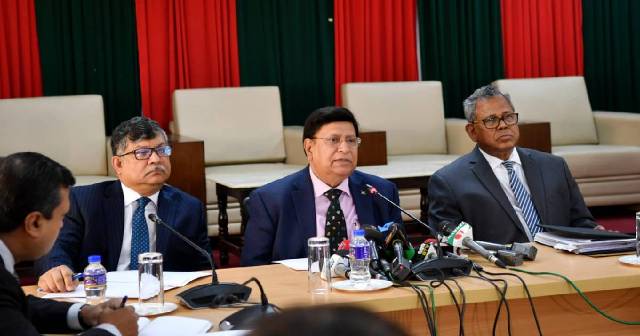 Online Desk : Bangladesh will seek “increased investment” from Italy as part of its efforts to have stronger relations with European countries during Prime Minister Sheikh Hasina’s bilateral visit to Rome, beginning on Tuesday.

Foreign Minister Dr AK Abdul Momen briefed reporters at the Ministry of Foreign Affairs on various aspects of the four-day visit on Sunday.

Responding to a question, the Foreign Minister said three are three proposals on bilateral instruments between Bangladesh and Italy.

These draft agreements are on cultural exchange, political consultations and cooperation in the diplomatic field, he said adding that these have not been finalised yet.


The Foreign Minister said a joint statement will be issued after the bilateral meeting between the two Prime Ministers.

“If it’s not possible to sign the proposed agreements during the visit, those will be reflected on the joint statement, and the instruments will be signed afterwards,” he said.

The two leaders are expected to discuss the whole range of bilateral issues as well as important regional and international matters of common concern, said Dr Momen.

He hoped that the visit will be beneficial for Bangladesh economy and its ongoing development.

The government is considering the visit as highly important as it involves the search for fresh investments by Italian entrepreneurs in Bangladesh, export of more items to Italy as well as seeking areas to export skilled manpower.


“Italy has so far accommodated many of our nationals and more are waiting for getting residence right there. So, the issue (manpower export) will definitely be discussed (during the visit),” Momen said.

As per the schedule, a VVIP flight of Biman Bangladesh Airlines carrying the Prime Minister and her entourage will take off from Hazrat Shahjalal International Airport (HSIA) at 9:30am on Tuesday.

The flight is expected to reach Fiumicino Airport, Rome around 4:15pm (Italian time). Bangladesh Ambassador to Italy Abdus Sobhan Sikder will receive her at the airport.

In the evening, she will attend a community event at Parco dei Principi Grand Hotel & SPA.

On February 5, the Prime Minister will inaugurate the Chancery Building of Bangladesh Embassy at Via Dell’Antartide in Rome, Italy.
After that, she will hold her bilateral talks with Italian Prime Minister Giuseppe Conte at Palazzo Chigi and join the official lunch.

In the afternoon, high officials of Italian business companies will meet her at Parco dei Principi Grand Hotel & SPA.


In the evening, she will attend dinner to be hosted by the Bangladesh Ambassador in honour of her at Parco dei Principi Grand Hotel & SPA.

On February 6, Pope Francis will give audience to Sheikh Hasina. After that, she will leave Rome for Milan.

On February 7, she will leave Milan for Dhaka by Emirates Airlines from Milan Malpensa International Airport at 1:40pm (local time).

Bangladesh Ambassador to Italy Abdus Sobhan Sikder will see the Prime Minister off at the airport.

She will arrive at Hazrat Shahjalal International Airport (HSIA) on February 8 at 8am.