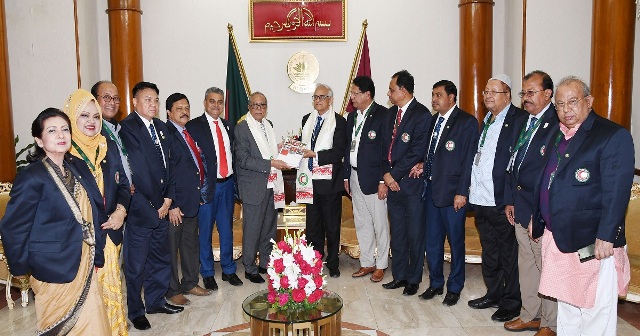 They also apprised the President of their different activities and infrastructural development.

The delegation said BDRCS has taken blood collection programmes across the country which will fulfill the one-fourth demand of blood.


In the report, it was mentioned that the organisation received Tk 200 crore which is being spent to support the displaced Rohingya and refugees in a balanced way.

BDRCS chairman also mentioned their different initiatives taken during any natural calamity and training for youths.

Mentioning that BDRCS is a very well-known organisation in the world, the President said it is playing an effective role during disaster and post-disaster period.

He also expressed the hope that the society will continue its all-out efforts to serve the country.

Abdul Hamid underscored the need for ensuring accountability and transparency in every work.


During the meeting, he apprised the President of their different activities and sought cooperation from the President for infrastructural development.

The VC said the establishment of the medical university is an important initiative for the development of medical education.

He also hoped that the university will contribute a lot to the development of higher education in the medical sector of the region. Secretaries concerned to the President were present.