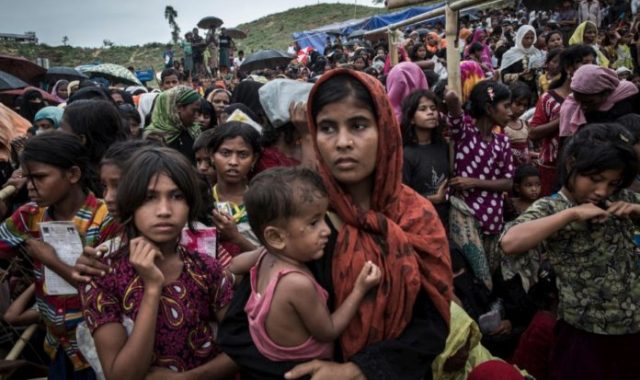 Online Desk : UN-backed International Criminal Court (ICC) prosecutor office today said they launched investigations into the “alleged crimes” against Myanmar’s minority Rohingya Muslims to expose to justice the perpetrators of what is said to be “genocide”.

“It (investigation) is (actually) already underway . . . ultimately justice will be done,” Director of Jurisdiction of the ICC Office of the Prosecutor (OTP) Phakiso Mochochoko told a media briefing in the capital.

He said their investigation findings were expected to expose to justice the individual perpetrator of violence, ranging from an ordinary soldier to general or anybody else, for their crimes committed in Myanmar’s Rakhine state, the Rohingyas’ homeland.


The ICC prosecutor’s office, known as OPT as well, announcement came two weeks after International Court of Justice (ICJ), dubbed as UN backed world’s top court, delivered its verdict after a detailed hearing ordering Myanmar to take “all measurers within its power” to prevent genocide.

All the judges of the 17-member ICJ panel unanimously observed that the Rohingyas still remained exposed to “serious risk” of genocide.

ICJ is mandated to settle issues among states while ICC is empowered to try individuals for international crimes and hand them down as high as life term imprisonment.

During the media briefing today, the ICC prosecutors office director, however, hinted that investigation process could be “long, hard and challenging” and “it may take one year, two years, (or) three years (or more) “.

“But justice will finally be done to the victims of Rohingyas situation,” Mochochoko said while the investigators were receiving all out cooperation from Bangladesh government.


“We have engaged with the government of Bangladesh and we have received undertaking that we will get cooperation throughout the process (investigation) from Bangladesh,” he said.
But, Mochochoko virtually accused Myanmar of non-cooperation saying “unfortunately” the ICC investigators were not getting any cooperation or assistance from Naypyidaw despite their continued and intense efforts.

“We appeal to the government of Myanmar to engage with us, to work with us, if we all want justice for the victims of the crimes,” he said.

Mochochoko is currently leading an OTP delegation to Bangladesh in line with the mandate it obtained under the Rome Statute, concerning the Rohingya situation in Bangladesh and Myanmar.

In November 2019, ICC Judges authorised the request by ICC Prosecutor Fatou Bensouda to investigate alleged crimes against humanity committed against the Rohingya people from Myanmar.


“This is the first such visit (in Bangladesh) by prosecutor office since the opening of a formal investigation,” Mochochoko said.

Earlier in a statement on November 22, ICC Prosecutor Fatou Bensouda said the ICC judges feared that Myanmar may have ‘state policy’ to attack its minority Rohingya population in Rakhine.

“The Judges accepted that there is a reasonable basis to believe that – there may have been a state (Myanmar) policy to attack the Rohingya population,” she said in the statement.


Bensouda at that time also said the ICC judges in their initial observation said many sources indicated “heavy involvement of several Myanmar government forces and other state agents” in crimes committed against Rohingyas.

Bangladesh currently extends makeshift refuge over 1.1 million forcefully displaced Rohingyas in Cox’s Bazar while most of them arrived since Myanmar launched a military crackdown on August 25 in 2017, which the UN called a “textbook example of ethnic cleansing” and dubbed as “genocide” by other rights groups.
(BSS)