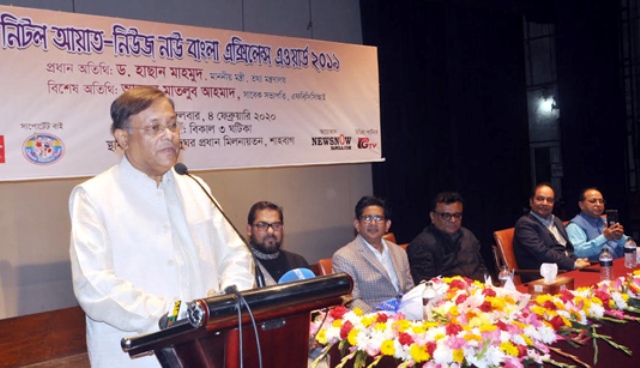 Online Desk : Information Minister Dr Hasan Mahmud today called for introduction of honesty and morality award to encourage the people practicing moral values to build an enlightened nation.
“Man has conquered the space, sent human-less vehicles on the Mars and now they are trying to live on the Mars. But at the same time, the people are losing humanitarian values and morality. Now it is very much important to recognize the honesty of people to encourage them practicing moral quality and values,” he said.

The minister said this while addressing the award giving ceremony of “Nitol-Aayat Newsnow Bangla Excellence Award” at National Museum here.

Dr Hasan said sometimes honesty of rickshaw pullers becomes headlines of newspapers. “We noticed a news item that rickshaw pullers got huge amount of money in streets but he returned the money to the owners with the help of police. Such honesty should be awarded,” he added.

Hasan said infrastructural developments can make a developed country but practicing of humanitarian values is a must to have an enlightened nation.

“We are progressing fast to become a developed nation. We have surpassed Pakistan in every social, economic and human index,” said the minister.

He expressed his optimism that Bangladesh would even exceed India in per capita income within next two years.

Dr Hasan said once Pakistanis used to neglect Bangladesh but now their economists are calling upon their government to follow Bangladesh for developments.

The minister said the government is making its best efforts to turn the country into a developing one by 2021 and a developed one by 2041.

“We want to instill humanitarian values into our next generation to build a developed nation having moral and human values” he said.

He said the Bangalee nation possesses higher social norms and values than the Western society. “We have to practice our own social norms and values to build a society with humanitarian qualities,” he said.
Bangla news portal newsnowbangla.com arranged the programme where five persons and an organization were awarded for outstanding contributions to different sectors.