Everyone has a role in women’s empowerment: Fazilatunnessa 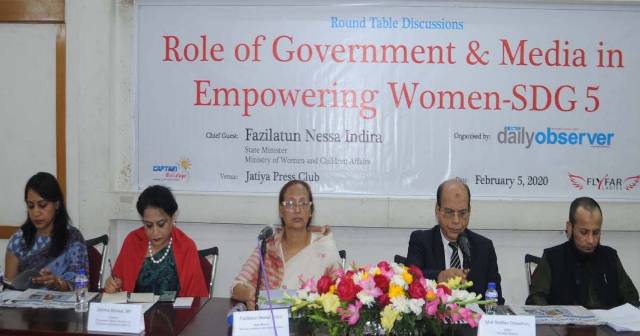 Online Desk : State Minister for Women and Children Affairs Fazilatunnessa Indira on Wednesday said that both media and people from all walks of life have to work together to change the status quo and realize a women-friendly society.
“We cannot break our culture but we can slowly bring about changes in our culture. Both media and the people have to play a role in this regard,” Fazilatunnessa Indira said while addressing a roundtable discussion as chief guest on “Role of Government and Media in Empowering Women- SDG 5” organized by The Daily Observer at Jatiya Press Club.


It is not possible for government alone to solve the problem. Prevention of violence and other forms of discrimination against women is possible if the media launches massive awareness and people work together, she said.

Describing various initiatives taken by the government for women’s empowerment, the State Minister said ten million (one crore) women have been given IT training across the country and it would be completed by this year, the Mujib Centenary.

“Though there is a lot of improvement in women’s empowerment, prevention of child marriage is a challenge. We are hopeful of eradicating child marriage within this Mujib Year,” she said.

At his welcome speech, Editor of the Daily Observer Iqbal Sobhan Chowdhury said that only the implementation of the SDGs goals can ensure women’s right and empowerment.


“There is no alternative to the implementation of SDG goals to uplifting women’s dignity and their rights and to ensure it people from every corner needs to work together,” he added

Selima Ahmed, MP, and also president, Bangladesh Women Chamber of Commerce and Industry (BWCCI) said corruption is an obstacle for development of women. Law enforcers’ failure to abide by their duties leads to discrimination, she said.

Farida Yasmin, General Secretary of Jatiya Press Club, said that women must go forward with the help of men as we still live in a patriarchal society.

In her keynote presentation, Sharmin Islam said that to achieve gender equality by 2030 requires urgent action to eliminate many root causes of discrimination that still curtail women’s rights in private and public domains.


She also noted that the existing discriminatory laws need to change to ensure gender equality.

Talking about the present status of women globally, she said that about 49 countries still lack laws protecting women from domestic violence, while 39 bar equal inheritance rights for daughters and sons.

She also said that, based on data from 87 countries, 1 in 5 women and girls under the age of 50 experienced physical and sexual violence by an intimate partner within the last 12 months.

“It leads women lower earnings and less time to engage in non- work activities,” she added.


She suggested removing all the discrimination and gender gaps at first government needs to set up its priorities which will be helpful for achieving SDG goals.