Launch social movement against use of polythene: President 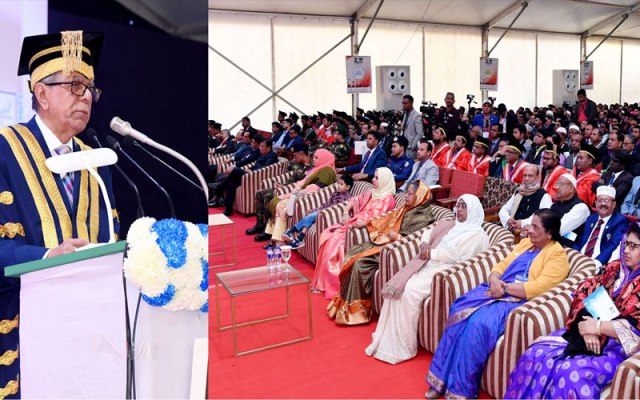 Online Desk : President M Abdul Hamid today asked the graduates and students to launch a moral and social movement against the use of anti-environmental polythene as he addressed the second convocation of the Patuakhali Science and Technology University (PSTU) here.

“Use of polythene here and there should be banned officially … Polythene-made used water bottles and shopping bags pollute our environment and they are also health hazardous,” he said, asking students to build mass awareness against their use.

The President, also the Chancellor of the university, asked them to take oath from the ceremony to do vigorous campaign against the use of polythene bag, throwing of used plastic bottle and having fast food items and unhealthy soft drinks.


“We go to the market empty handed but return with many polythene bags… The children are getting fatty taking fast food and other drinks. But we have to change this food habit,” he told the attendees.

President M Abdul Hamid asked the graduates to make them competent for becoming the world-standard citizens.

“There is no alternative to science and technological education to cope with the global competition at the advent of the Fourth Industrial Revolution,” he said.

The President called upon the students to uphold Bangladesh brightly worldwide and do the needful for the dearest motherland.

He directed the PSTU authority to formulate a time-befitting curriculum realizing the significance of the Fourth Industrial Revolution (IR).

The head of the state asked all concerned to ensure that the higher studies should never be for earning certificates only, because education without quality learning is worthless.


“Education without quality learning is valueless . . . It has become one of the big challenges for Bangladesh to ensure quality education,” he added.

Abdul Hamid advised the graduates to do welfare of the country and its people as the country contributed a lot to their attainment.

At the convocation ceremony, a total 3,706 post-graduates and graduates students were conferred with degrees, 63 students were given gold medals for their academic excellence and 11 researchers were given Doctor of Philosophy (PhD) degree.

The President expressed his satisfaction over the PSTU’s holding second position among all science and technology universities across the country according to international research journal.

President Hamid said the students will have to lead the development and progress of the country in days to come.


“With your (graduates) help, the country would become “Sonar Bangla” as dreamed by Father of the Nation Bangabandhu Sheikh Mujibur Rahman”, Hamid hoped.

“And subsequently you will play a pioneering role to materialize the incumbent government’s ‘Vison-2021’ and ‘Vision -2041’ by inventing time-befitting technologies with the proper use of your knowledge and talent,” the President added.