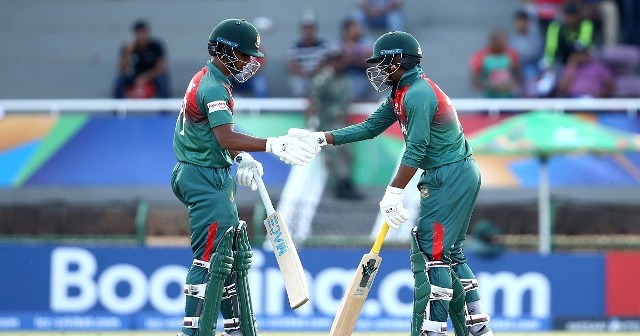 Sports Desk : Bangladesh marched into the final of the ongoing ICC Under-19 World Cup with a thumping six-wicket victory over New Zealand at Potchefstroom on Thursday.

The Young Tigers’ opponents in the final on Sunday will be the old nemesis, India.

Whatever the outcome, it will mark the country’s first appearance in the grand finale of a major ICC event, improving on the semifinal appearance at the 2016 Under-19 World Cup, when it was held in Bangladesh.

The senior team’s best showing at the ICC World Cup since first qualifying for the event in 1999 was qualification for the quarterfinals in 2015.But Akbar Ali’s cubs have displayed a killer instinct and hunger in their performances throughout the tournament that have rarely, if ever, been present in Bangladesh teams of the past. They remain unbeaten, as are their opponents for Sunday’s final.In today’s second semifinal, it came down to Bangladesh needing to score 212 runs in 50 overs to write this new chapter of Bangladesh cricket.


Parvez Hossain Emon and Tanzid Hassan, the two openers who gave the team a number of good starts in the tournament, were parted with just 23 on the board on this occasion though, as Tanzid was felled by Clarke. Emon followed him soon after, reducing the team to 32/2 and for the first time in the tournament barring a rained-out encounter with Pakistan, Akbar Ali’s team looked under pressure.

But the third wicket stand between Towhid Hridoy and Mahmudul Hasan Joy added 68 fluent runs to give the innings some impetus, before Hridoy fell for an imperious 40 off 47 balls with the team score 103/3 reading. But Bangladesh were not yet safe.Then Mahmudul and Shahadat Hossain combined for a brilliant partnership that took the team to the doorstep of victory before being broken, adding exactly 100 runs which ensured an easy win for the junior Tigers. Mahmudul ruled over the Kiwi bowlers with great aplomb, reaching a most deserved 100 studded with13 fours before becoming the fourth wicket to fall.

Mahmudul fell when Bangladesh needed 11 runs to seal the game. Shahadat and captain Akbar Ali finished the job to book a place in the final against India on February 9 at Senwes Park, Potchefstroom.


Kristian Clarke, David Hancock, Jesse Tashkoff and Beckham Wheeler-Greenall took one wicket each but the Bangladeshi batsmen were good enough for them.

Earlier, Bangladesh won the toss and opted to bowl first. The bowlers justified the decision conceding only 26 runs for one wicket in the first 10 overs.

Despite a well-fought 75 runs by Beckham Wheeler-Greenall, Bangladesh managed to restrict New Zealand to a chase able total.

Left-arm pacer Shoriful Islam bagged three wickets for Bangladesh conceding 45 runs in 10 overs giving away 19 runs in his last over.

New Zealand started on a negative note as they lost their first wicket in the 2ndover of the match when Shamim Hossian removed Rhys Mariu for just one run. In the first powerplay of the innings, Bangladesh couldn’t manage any wicket, but bowled economically.Bangladesh struck again in the 12th over when left-arm spinner Rakibul Hasan scalped the wicket of Ollie White for 18 off 43.


New Zealand were clueless to come up with a perfect approach of batting as the Bangladeshi bowlers were clever to not give more run. Fergus Lellman fell as the 3rd batsman for 24 off 50 balls when Shamim struck again in the 21st over of the innings.

The Kiwis contributed their highest 67 runs in the 5th wicket stand by Nicholas Lidstone and Greenall.

Shoriful broke the stand in the 41st over with a lower full-toss at the leg stump. Nicholas went to cut it toward the leg area but failed to connect the ball. Shoriful appealed for the lbw and the umpire didn’t hesitate to accept it.


In the last powerplay, New Zealand scored 72 runs losing four wickets. Shoriful conceded 19 runs in the last over of the innings, which helped New Zealand to pass the 200-run mark.