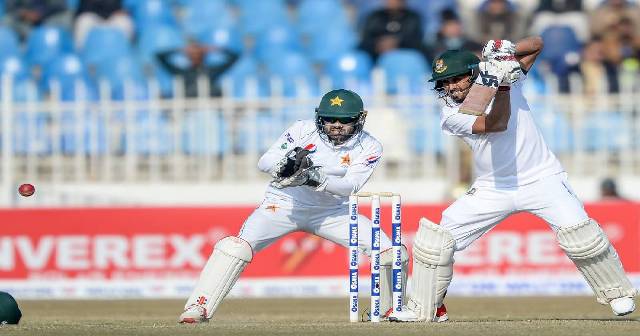 Sports Desk ; Bangladesh tumbled for 233 runs in 82.5 overs while batting first in the first Test of the two-match series against Pakistan that commenced on Friday at Rawalpindi.
Mohammad Mithun was the highest scorer for Bangladesh hitting 63 while Najmul Hossain Shanto posted 44. Most of the Bangladeshi batsmen were dismissed in spite of having been settled in the wicket.

Pakistan captain Azhar Ali won the toss and sent Bangladesh to bat first. Tigers lost the debutant opener, Saif Hassan, in the first over of the game. In the second over, Bangladesh lost veteran Tamim Iqbal.

Saif was removed by Shaheen Afridi while Mohammad Abbas took the wicket of Tamim. Saif went to drive Shaheen through the cover area but managed only a touch to the slip cordon where Asad Shafiq grabbed a brilliant catch.


Tamim missed a delivery off Abbas, which hit his pad. Asad immediately called to take the review, and Azhar didn’t think otherwise. The review said the ball would have smashed off stump.
After losing two wickets in three runs, Bangladesh were in big trouble. Comeback man Najmul Hossain Shanto and captain Mominul Haque tried to control the initial damage. They added 59 runs in the third wicket stand.

But Mominul fell prey to Shaheen for 30 while playing a cover drive. The ball kissed his bat and went to the glove of the wicketkeeper.

Right after the launch break, Najmul fell for 44 off 110 balls with six fours. The left-hander looked comfortable in the middle but failed to hit a half century.

Najmul went to clear Abbas to the point area but only prodded the ball to the wicketkeeper. The fourth wicket in the form of Mahmudullah Riyad was taken by Shaheen again. The ball was wide, and Mahmudullah went to clear it to the cover area but a thick edge made him walk back to the dressing room for 25 off 48 balls.

After Shanto, Mominul and Mahmudullah getting dismissed in spite of being settled in the wicket, the onus was on Liton Das and Mohammad Mithun to come up with a big stand but they ended up only for 54 in the partnership.

Liton fell for 33 off 46 with seven fours. He was removed by Haris Sohail. It was a fuller delivery at the leg-stump. Liton went to sweep it but missed the ball which has ended up hitting his pad.

Mithun was the highest runs getter for Bangladesh scoring 63 off 140 balls with seven fours and one six.

Pakistan were about to start their first innings but due to bad lights, the umpires took off the bails for the day one of the game.