PM for maintaining peace for uplift 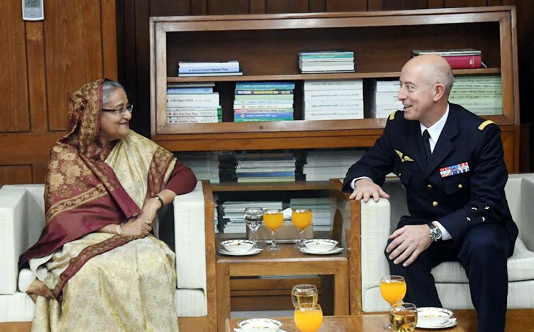 Online Desk : Prime Minister Sheikh Hasina today put emphasis on maintaining peace for further development of the country as Chief of France Air Force General Philippe Lavigne paid a courtesy call on her.
“We want peace, not war as it (peace) is required for development…we want to spend more money for the country’s socioeconomic uplift,” PM’s Press Secretary Ihsanul Karim quoted the premier as saying while briefing reporters after the meeting at the PM’s Jatiya Sangsad Office here this evening.

The premier, however, said: “We don’t want war, we want to impart more training to the people working in the defence sector.”


Sheikh Hasina said Bangladesh has graduated to a developing country from a least developed one, and peace is required for further uplift.

The prime minister said 82 percent people of the country lived under the poverty level when Bangladesh earned independence. “Now we’ve brought the poverty rate to 20:5 percent,” she said.

While talking about terrorism, Sheikh Hasina said it is a global problem. “We’ve engaged the people of all strata to create awareness against the social menace,” she said.

The prime minister recalled the French support to Bangladesh’s liberation war and said since then, the two countries are maintaining wonderful relations.

General Philippe said a plan is being taken to bolster cooperation between the France and Bangladesh Air Forces, the press secretary told reporters.

The French air force chief also stressed the need for ‘freedom of navigation’ for socioeconomic development of the people.

He highly appreciated the contributions of the Bangladeshi peacekeepers to maintaining peace in the trouble-torn regions of the world.


Referring to his visit to Bangabandhu Memorial Museum in Dhanmondi, General Philippe told the premier that he became very emotional after visiting the historic building which bears the memories of the Father of the Nation.

He also mentioned the meeting with his Bangladesh counterpart.