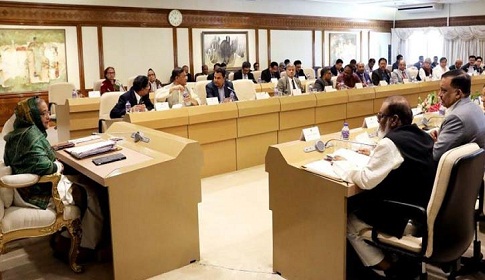 Online Desk : The cabinet today approved in principle a draft of the “Narcotics control (Amendment) Act, 2020” keeping a provision of holding the trial of drug related cases in the competent courts instead of tribunals.
The approval came from a regular weekly meeting at the Prime Minister’s Office held this morning with Prime Minister Sheikh Hasina in the chair.

“The cabinet in principle approved the draft of “Narcotics control (Amendment) Act, 2020 keeping a provision of holding trial of drug related cases in the competent courts to dispose those quickly alongside decreasing the huge number of backlog cases,” Secretary (Coordination and Reform) of the Cabinet Division, Sheikh Mujibur Rahman told a news briefing after the meeting.


He added that the draft law has proposed to replace section 44 alongside making necessary amendments to 22 sections out of section 55 of the existing “Narcotics Control Act, 2018” with changing the provision of holding trials of drug related cases in the tribunals.

In accordance with the newer section 44 to be replaced by existing one, the trial of narcotics related cases will be held in the competent courts considering its importance, he said.

Replying to a query, Mujibur said, the main reason of bringing amendments to the law is to dispose of the drug related cases at the quickest possible time and decrease the backlog of huge number of pending cases.

He added that Bangladesh Parjatan Corporation (BPC) is now facing difficulty in taking prompt decision as it has a board of directors of only four persons with BPC Chairman at the top. Due to this reason, he said that the BPC is not getting desired assistance from the concerned ministries and departments. He added that if the proposed law is passed, the BPC board of directors will be formed consisting senior secretaries, secretaries and appropriate representatives of the concerned ministries and departments.


Replying to a query, he said, in accordance with the cabinet decision no more Bangladeshis will be brought back from coronavirus affected China, as the authorities concerned didn’t find any authenticity of the allegations
that Bangladeshis residing in China are not getting foods and other facilities.

The cabinet also adopted a motion of felicitation as the Bangladesh Under- 19 Cricket Team has clinched the ICC Under-19 World Cup trophy by defeating mighty India by 3 wickets in the final of the tournament at Senwes Park in Potchefstroom, South Africa on Sunday.
(BSS)