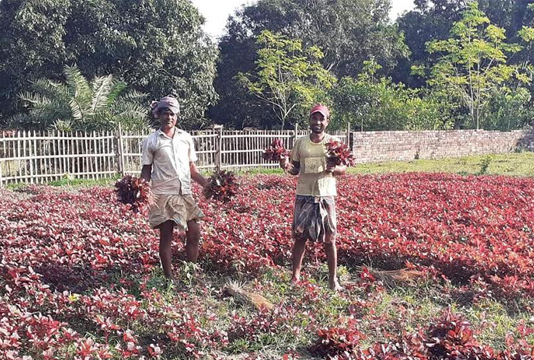 Online Desk : Farming of winter vegetables has gained popularity in the region including its vast Barind tract during the winter season for the last couple of years contributing a lot to meeting up the gradually mounting vegetable demands with rising population.
According to the sources concerned, success has been attained due to the growers-level expansion of high yielding varieties, modern technologies and irrigation.

In the current season, vegetable farming has exceeded the target of producing around 18.72 lakh tonnes from 86,708 hectares of land set by the Department of Agriculture Extension (DAE) in all eight districts of Rajshahi division. But, the farmers have brought 87,612 hectares of land under farming of varieties of vegetables creates opportunities for additional production.


Currently, entire of the kitchen markets in the region are abounds with all kinds of winter vegetables including cauliflower, cabbage, bottle gourd, Indian spinach and red amaranth and some non-conventional ones like broccoli benefiting both growers and consumers.

Jamal Hossain, 45, a farmer of Rajabari village under Godagari upazila, said he earned Taka 45,000 after selling cauliflower from one bigha of land after transplanting its seedlings hardly two months back at a cost of Taka 15,000. He is very much happy over the vegetable farming because he gets good yield with fair market price within a short time. Hossain said cultivation of broccoli has gradually been gaining popularity in the region for the last couple of years by dint of its lucrative market price and gradually mounting demand.

Nabibur Rahman, 45, another farmer of Krishnapur village under Tanore upazila, has become an icon of vegetable cultivation at his locality. His annual earning is around Taka three to four lakh on an average at present.

As part of their continuous efforts of lessening pressure on groundwater, various government and non-government entities concerned are seen inspiring the grassroots farmers towards bringing more lands under various water-saving crops including vegetables in the water-stressed region.


Barind Multipurpose Development Authority (BMDA), an ever-largest irrigation providing state-run organization in the country’s northwest region, has, so far, installed 240 dug-wells in the hard barind areas where the irrigation facilities couldn’t be reached as yet.

Around 16,000 villagers are seen cultivating vegetables on around 600 hectares of land after the best uses of the dug-well water.

He said vegetable farming in both commercial and homestead method is gradually increasing in the vast Barind tract as many people are seen humming towards the farming leaving behind the high-irrigation consuming crops. Both acreage and production of various types of vegetables were increased significantly in the area during the last couple of years benefitting the consumers in general.


He said the BARI has been working here to transfer modern technologies and high yielding varieties among the farmers for making them benefited.
Dev Dulal Dhali, Additional Director of DAE, said Rajshahi has been regarded as the country’s most prospective vegetable producing region.

The farmers are interested in vegetable cultivation as they have been gaining more profit during the last couple of years, he said.

He said farmers are cultivating vegetables on fallow lands and homesteads along with farm land, increasing its production which is changing the economic condition of local farmers.
(BSS)