Khaleda can apply for parole only after acknowledging crimes: Hasan 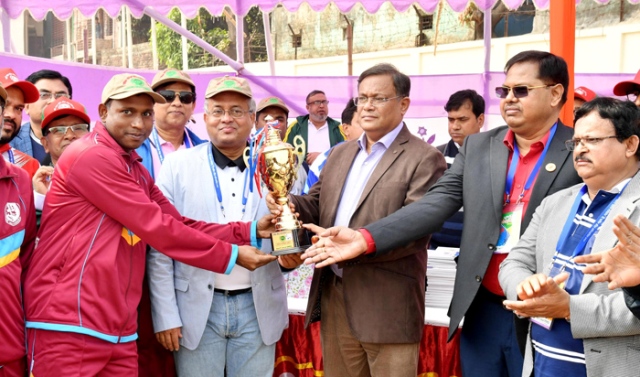 Online Desk : Information Minister Dr Hasan Mahmud today said BNP chairperson Begum Khaleda Zia could apply for parole only after accepting her crimes. “The government only can consider her parole, if she (Khaleda Zia) applies for it accepting her crimes,” he told reporters after attending a sports competition on Government Physical Education College ground at Mohammadpur in the capital.
Agrani Bank Limited organized the annual sports competition for its employees. Hasan said “The government does not have any authority to free Khaleda Zia. . . if it (government) is to exercise this authority, then the honorable
prime minister will have to discharge duties as the chief justice which the constitution does not allow.”

He reiterated that legal means were only option to release Khaleda Zia from jail. “There is no way of freeing BNP chief Begum Khaleda Zia through movement or street campaigns, and the legal way could be the only path to release her from jail,” said Hasan, also Awami League (AL) joint general secretary.


The minister said the BNP chief is in prison being convicted in a graft case and only the court can release her. Replying to a query about a phone call between BNP secretary general Mirza Fakhrul Islam Alamgir and AL general secretary Obaidul Quader on releasing Begum Zia, the minister said they (BNP) don’t know what they want. “Once they
say that they will go for movement to release her. . . On the other hand, they phoned our general secretary to free her,” he added.

About the treatment of BNP chairperson, Hasan said she (Khaleda Zia) is regularly having health checkups and being treated by specialized doctors at Bangabandhu Sheikh Mujib Medical University (BSMMU) Hospital. “The government is always sincere in providing the best healthcare services to Begum Khaleda Zia. She has been kept in the BSMMU Hospital with her personal domestic-help instead of prison,” he said.

The minister went on saying that, “You all know that when our party’s general secretary was ill and were in critical condition, he was also admitted to BSMMU hospital. And the foreign doctors appreciated the treatment of the hospital what was given to our general secretary.”


So, he said, there is no scope of misleading the countrymen by spreading falsehood on Begum Khaleda Zia’s treatment issue.

In the inaugural function, the minister said Bangladesh is moving ahead indomitably to fulfill the dream of Father of the Nation Bangabandhu Sheikh Mujibur Rahman under the dynamic leadership of his worthy daughter Prime Minister Sheikh Hasina.


He said the country has gained remarkable progress in many socioeconomic indexes, including human development index, and achieved GDP growth higher than other countries in the last 11 years.


He said the GDP growth rate was 8.15 percent in the last year which was the highest among the all countries in the globe. The per capita income is now around 2000 US dollar while it was only $600 in 2008, he said. Agrani Bank Managing Director Mohammad Shams-ul Islam, among others, was present at the function.
(BSS)