PM for strengthening connectivity with neighbours 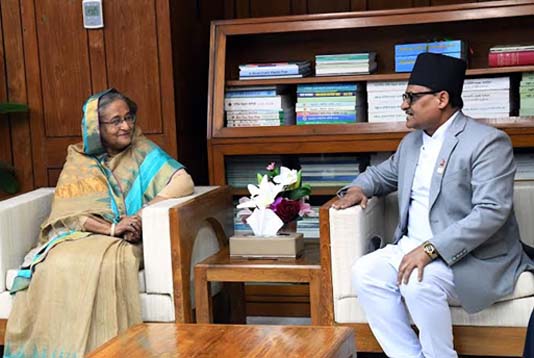 The prime minister said this when Nepalese Ambassador to Bangladesh Dr Banshidhar Mishra paid a courtesy call on her at the PM’s Jatiya Sangsad office here this evening.


The prime minister said Bangladesh is expanding the connectivity with the neighbours, and even reopening the routes, which were closed down after the 1965 India-Pakistan war.

Noting that her government has modernised and developed airports, Sheikh Hasina said the people of the neighbouring countries, living near Bangladesh borders, can use this opportunity to travel abroad using the ports.

“We’re trying to open air link with the USA and Canada,” she said.

The prime minister said Nepal and Bhutan can use Bangladesh’s Syedpur Airport as well as Mongla and Payra seaports.

She said Bhutan has been offered to find out a place to make a warehouse for storing the goods to be imported through the ports.

Mentioning that Bangladesh shares an excellent relation with Nepal, Sheikh Hasina recalled the Nepal’s support to Bangladesh during the 1971 Liberation War.

Dr Mishra said Nepal wants to establish a comprehensive connectivity with Bangladesh. “The motor vehicle agreement is now on track,” he was quoted.

He put emphasis on increasing the trade between Nepal and Bangladesh particularly commodity trade.


The Nepalese envoy highly appreciated Sheikh Hasina for her leadership to develop the Bangladesh. “You’re honoured and highly revered in Nepal. The Nepalese people praise your leadership. We follow your country,” he told the prime minister.

He went on saying: “Bangladesh is progressing fast under your dynamic leadership which is an example for us to follow.”

Noting that both Nepal and Bangladesh share similar culture, the Nepalese ambassador recalled Bangladesh’s support to Nepal during earthquake terming it as a great support.

The Nepalese ambassador handed over an invitation letter to Prime Minister Sheikh Hasina to attend “Sagarmatha (mountain) Dialogue” to be held in Kathmandu on April 2 to 4 next.