Khaleda’s release on parole does not depend on prayer: Hasan 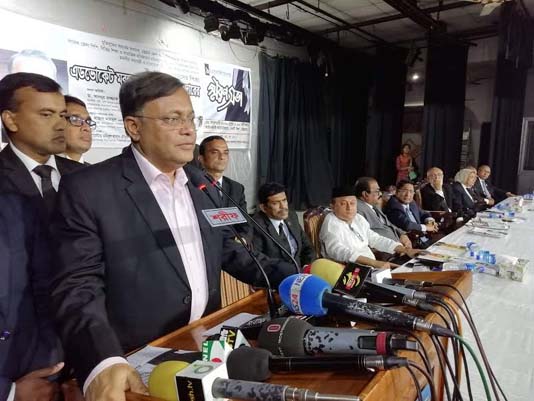 Online Desk ; Information Minister Dr. Hasan Mahmud today said the matter of releasing Khaleda Zia from jail on parole does not depend on her prayer.
He said it will be assessed whether the release on parole is needed or not at all.

The information minister said if she is needed to be released only for treatment then it is not necessary. Because, she is getting better treatment at Bangabandu Medical University Hospital now, he added.

Dr. Hasan Mahmud said the physical problems of Khaleda Zia are old and these problems are being highly exaggerated to mislead the people of the country.


He told this while briefing the journalists after joining a memorial meeting on his father and former Chattogram District Bar Association (CDBA) president advocate Nurussafa Talukder held at the auditorium of CDBA this evening.

Hasan also said he came to know from the media reports that her family desires release of Khaleda Zia even on parole. Parole is a kind of specialized release from custody, he added.

Dr Hasan, also joint general secretary of Awami League, said parole is practiced in case of death of any close relative of the convict or any other specific ground.

The information minister said BNP has no power to release Khaleda Zia through movement and Khaleda Zia is not a political prisoner and her release should be made through legal procedures.

The matter of release on parole will be considered soon after getting proper prayer, he said adding that no such prayer has far been made by BNP.

Dr. Hasan Mahmd said during the regime of the-then Prime Minister Khaleda in 2004, grenade attack was launched with the patronization of her government and supervision of her son aimed at killing Sheikh Hasina.

He said now Khaleda Zia is in jail being convicted in a corruption case.


Hasan said Prime Minister Sheikh Hasina was never involved with the politics of revenge like the BNP chairperson.

He further added that his father Advocate Nurusafa discouraged politics but subsequently did not oppose him from involving in student politics.

He urged the lawyers to follow the ethics of laws of the land for fair discharge of professional responsibilities.