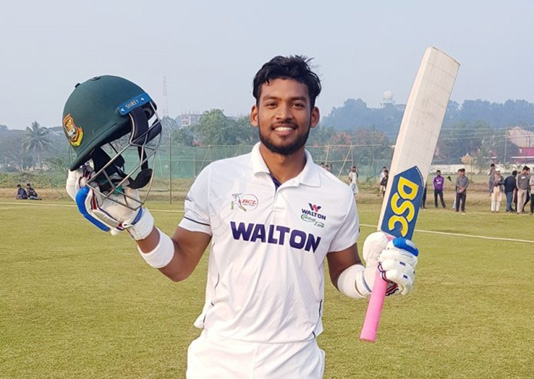 Sports Desk : Youngster Nazmul Hossain Shanto hit his maiden double century in the first class cricket as Walton Central Zone took them on the verge of a victory against South Zone in the third round game ofBangladesh Cricket League (BCL) at Sheikh Kamal International Cricket Stadium in Cox’s Bazar (ground-1) on Sunday.

Thanks to Shanto’s 253 not out, Central Zone set a winning target of 507 for South Zone, who in reply ended the day on 159-4. They still need 348 runs with six wickets at hands, which looked highly unlikely.


Resuming the day on 209-6, Central Zone declared the second innings on 385-
8 with Shanto single-handedly guiding the side. He struck 25 fours and nine
sixes in his 310 ball-253 not out.

The second best was Raqibul Hasan’s 39, which gave a testament of how one-
man show was Central Zone’s second innings. Zabid Hossain with 36 was the
other notable contributor.


South Zone whose strategic move of declaring the first innings on 114-4 now
backfired, started the chase in disastrous fashion with Shahriar Nafees being
out cheaply. Anamul Haque Bijoy and Fazle Mahmud shared an 87-run partnership
before the latter was dismissed on 25.

Anamul Haque Bijoy was removed after hitting five fours and seven sixes in his 119 ball-87. Before the bails were drawn, Shamsur Rahman Shuvo was batting on 44, with Nasum Ahmed on 1. Central Zone’s Mehidy Hasan Miraz picked up 2-55.
(BSS)