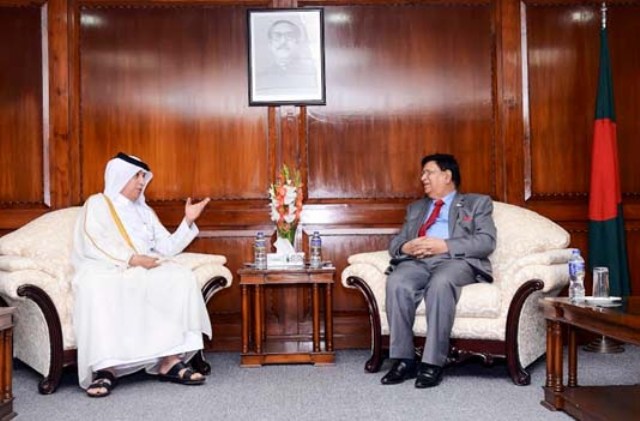 Online Desk : Foreign Minister Dr AK Abdul Momen today sought continued support from Qatar on Rohingya crisis for the quick repatriations of the Myanmar nationals to their homeland in a safe and secured manner.

He sought the support when a five-member delegation led by State Minister for Foreign Affairs of Qatar Soltan bin Saad Al-Muraikhi met him at his office here.

Dr Momen said Bangladesh has a big pool of IT professionals as well as a good number of event management firms, whom the government of Qatar can employ in their workplaces as well as during the Qatar FIFA 2022.

The foreign minister suggested the Qatar side for employing more professional workers in their different economic sectors.


The Qatari foreign minister said FIFA World Cup 2022 is a mega event for Qatar for which it requires support from other countries.

Momen said the Bangladesh government has undertaken befitting programmes to celebrate the birth centenary of the Father of the Nation Bangabandhu Sheikh Mujibur Rahman from March 2020 to March 2021.

Bangladesh will also celebrate the golden jubilee of independence in March 2021, he added.

Momen also said because of the government’s different measures, poverty rate has been drastically reduced during the last decade as well as Bangladesh has registered remarkable economic growth.

He said the Foreign Office Consultations would continue to review the progress of the ongoing cooperation and follow up.

Both leaders agreed to maintain cooperation for the mutual benefit of the peoples of Bangladesh and Qatar.
(BSS)