BNP against EVM use in Cattogram city polls 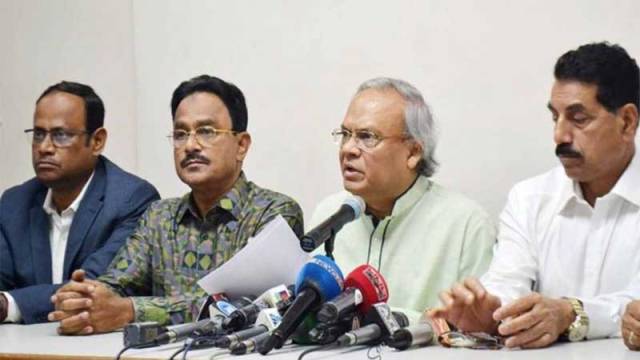 Online Desk : BNP on Monday opposed the move to use the electronic voting machines (EVMs) in the upcoming elections to Chattogram City Corporation, saying the Election Commission took the decision to rig votes again.

“Though voters in the Dhaka city elections rejected the EVMs vehemently, the Chief Election Commissioner (CEC) has again announced to use this means of digital vote rigging in the Chattogram city elections,” said BNP senior joint secretary general Ruhul Kabir Rizvi.Speaking at a press conference at the party’s Nayapaltan central office, he further said, “This means the move has been taken to create a scope for vote robbery in Chattogram in the same style of Dhaka. We condemn the CEC’s such a decision.”


Election to Chattogram City Corporation (CCC) will be held on March 29 as per the schedule announced by the Election Commission (EC).

The entire elections will be held using the EVMs instead of traditional ballot papers.

Rizvi said the EC should formulate time-befitting rules and regulations so that bad people cannot be elected.

“The Commission should also ensure such an election atmosphere so that people can vote for the candidates of their choice. But the CEC is going to use the EVMs that are turned down by the world instead of ensuring proper election atmosphere,” he observed.

The BNP leader claimed that the voters in Dhaka demonstrated their no-confidence in the CEC and the current EC with their low presence in the February-1 elections to two city corporations.


Rizvi said their party leaders and activists have long been demanding the release of their chairperson Khaleda Zia as she is very sick.

“We again urge the government to free her immediately and thus allow her to receive advanced treatment,” he added.

Asked whether Khaleda’s family members are active to apply for parole for her, Rizvi said their party is not aware of it. “We’ve not yet discussed the matter with the family members.”