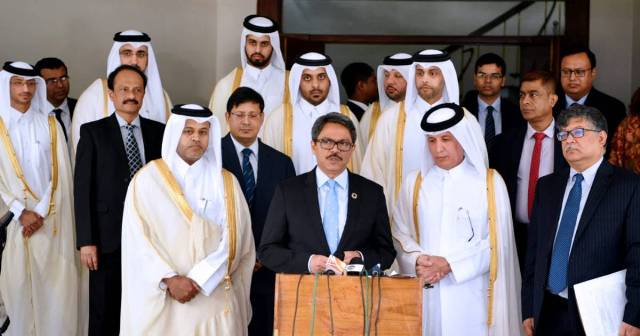 Online Desk ; Bangladesh and Qatar on Monday discussed ways to strengthen commercial ties further between the two countries and send more workers there ahead of the FIFA World Cup to be held in Qatar in November-December, 2022.
The issues were discussed at the first Foreign Office Consultations (FOC) between Bangladesh and Qatar held at State guesthouse Meghna.

Talking to reporters after the FOC, State Minister Alam said over 3.5 lakh Bangladeshis are working in Qatar and they need more ahead of the FIFA World Cup there. “We’re exploring new areas to send people there.”

He said the Ministry of Expatriates’ Welfare and Overseas Employment will work extensively on the front.Highlighting investment-friendly environment in the country, the State Minister discussed how a mechanism can be established to attract more investment in various ways, including through Qatar Fund for Development.

The State Minister also discussed signing of a number of MoUs between the two countries in the coming months, including one on avoidance of double taxation.

The two countries also discussed cooperation in the international forums under the UN.

The State Minister briefed his Qatari counterpart about the remarkable economic performance of Bangladesh and rapid rate of economic growth that Bangladesh has registered through the last decade, according to the Ministry of Foreign Affairs.


He apprised the Qatari side of the economic policy adopted by the Bangladesh Government in order to attain the Vision 2021 and Vision 2041 to translate Bangladesh into a self-reliant, modern and developed country.

The State Minister informed that the government is establishing 100 Economic Zones and a good number of Hi-tech Parks for different industries and urged the Qatari businessman to invest in Economic Zones and Hi-tech parks and cited the different incentives offered by Bangladesh government to foreign investors.He said the IT is a flourishing sector in Bangladesh where a large number of professionals are being engaged.

The State Minister said the private sector of the two countries may have more interactions and both sides may identify the areas of mutual cooperation in trade and investment.

He proposed that a joint Bangladesh Trade and Business Council between Bangladesh and Qatar may be formed.

Alam referred to the successful ‘Made in Bangladesh’ trade fair which was organized in Doha at the end of January 2020.


He also mentioned that Bangladesh and Qatar may establish cooperation in sectors like aviation management, shipbuilding and maritime affairs.

The State Minister informed that the government of Bangladesh will celebrate the birth centenary of Father of the Nation Bangabandhu Sheikh Mujibur Rahman from March 2020 to March 2021 in a befitting manner as well asl celebrate the 50th Anniversary of Independence of Bangladesh.

State Minister for Foreign Affairs of Qatar expressed happiness for the organization of the bilateral Foreign Office Consultations.

He said Qatar desires to establish partnership with Bangladesh in different economic sectors.

Alam suggested that Qatar could recruit skilled workers and professionals like doctors, engineers and nurses from Bangladesh.

He also mentioned that the Bangladesh government is working for ensuring low cost and safe migration of workers.


The Bangladesh side expressed extended thanks to the Qatari government for their support for the distressed Rohingya people living in Bangladesh.

The State Minister sought cooperation of the Qatari government for the safe and secure return of the Rohingyas to their homeland.

State Minister of Qatar assured that they would continue their support to Bangladesh over the Rohingya crisis.