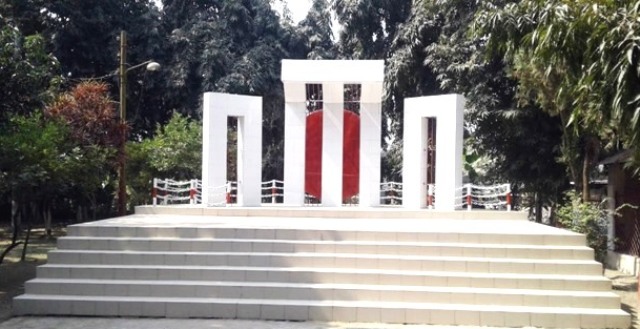 Online Desk : The nation is set to observer the ‘Shaheed Dibash’ (Language Martyrs Day) and the International Mother Language Day on Friday with extensive programmes.

People from all walks of life will pay glowing tributes to memories of the language movement martyrs, the valiant sons of the soil who made supreme sacrifices to establish the rights of the mother tongue, Bangla, in 1952. The day will also be observed around the world as the UNESCO recognised the Ekushey February as the International Mother Language Day on November 17, 1999.

The government, however, has already taken extensive programmes to observe the ‘Shaheed Dibash’ and the International Mother Language Day on February 21 in a befitting manner.


The day is a public holiday.

In observance of the day in a befitting manner, the Central Shaheed Minar
premises will be decorated with paintings, graffiti, buntings and selected
verses on the mother language.

Four-tier security will be enforced around the main altar of the Shaheed
Minar, its adjoining areas and the Azimpur graveyard of the language martyrs.

President Abdul Hamid and Prime Minister Sheikh Hasina will lead the
nation by paying homage to the Language Movement heroes by placing wreaths at
the Central Shaheed Minar at one minute past zero hours.

The President and the Prime Minister will also issue separate messages on
the eve of the day, paying glowing tributes to the martyrs of the historic
Language Movement of 1952.

Quran Khwani and offering Fateha will be held at Azimpur graveyard in the
city while prayers will be arranged at all worship places across the country
seeking salvation of the departed souls of the martyrs of the Language
Movement.

The programmes include placing of wreaths at the central Shaheed Minar at
one-minute past zero hours (Thursday midnight), hoisting at half-mast the
national and party flags at its offices across the country and Bangabandhu
Bhaban and hoisting black flags in the morning, wearing black badges and
placing wreaths on the graves of martyrs at Azimpur graveyard with Provat
Feri as a mark of respect to the Language Movement martyrs.

In observance of the day, ruling Awami League would take a two-day
programme.

The party will organise a discussion at Bangabandhu International
Conference Centre in the city at 3 pm on February 22 with its President and
Prime Minister Sheikh Hasina in the chair.


Like previous years, Dhaka University (DU) authorities will organise the
programmes at the Central Shaheed Minar in coordination with other relevant
agencies.

National dailies will publish special supplements marking the day and
Bangladesh Betar and Bangladesh Television and private radio stations and
television channels will air special programmes on the occasion.

On February 21 in 1952, Salam, Rafique, Shafique, Jabbar and Barkat
embraced martyrdom in police firing in front of the Dhaka Medical College and
Hospital (DMCH) as they took to the street to intensify the campaign to
establish Bangla as the state language of the then Pakistan, sowing the seeds
of subsequent movements for the country’s independence.

They were killed as police opened fire on students, demonstrating under the
All-Party Students Action Committee against conspiracies of Pakistani rulers
to declare “Urdu” as the only state language.


The movement for Bangla, however, did not stop and Pakistan government on
February 29, 1956 was compelled to recognise Bangla as one of the state
languages besides Urdu.

The decision, however, could not stop the movement against repression and misrule of Pakistani government and subsequently led to the War of Independence and ultimately the emergence of Bangladesh.
(BSS)