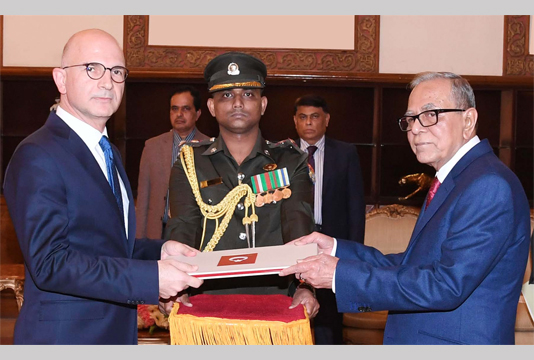 The envoys are: Mustafa Osman Turan of Turkey and Jeremy Christopher Courtenay Bruer of Australia. Welcoming the envoys, the President hoped that the bilateral relations with the countries will further be expanded during their respective assignments here, President’s Press Secretary Joynal Abedin told BSS after the meeting.

During the meeting with the Turkish ambassador, the President described the existing excellent bilateral relation between Bangladesh and Turkey as historic and very ancient as well. The head of the state mentioned that there many similarities in culture and heritages in many aspects between the two countries.


“The existing bilateral relation between the countries would be strengthened gradually,” he added. Referring to the Rohingya problem in Bangladesh, the President expressed his gratitude to the Turkish government to provide supports in this connection.

President Hamid also invited Turkish President to attend the upcoming D-8 summit scheduled to be held in Dhaka. “There is enormous scope of exploring the commerce and investment potentials between the two countries but this is yet to reflect in reality”, the President said, asking the new ambassadors to work on it being an initiator.

The ambassador said Turkey always gives priority to the bilateral relation with Bangladesh. He would take all necessary steps to enhance the trade and investment between Bangladesh and Turkey in the days to come.

Meanwhile, during the meeting with Australian high commissioner, Abdul
Hamid said Australia is one of the development partners of Bangladesh.

President Hamid thanked the Australian government and its people to
provide all-out support to different development sectors in Bangladesh.


He specially expressed his thanks to the Australian government to allow
Bangladeshi goods as duty-free and quota-free access to their country, which
helped increase bilateral commerce relations between Bangladesh and
Australia.

The President hoped that this bilateral tie would enhance in coming days.

Terming the existing Rohingya problem as a big one, the President
expressed optimism that Australia would help create conducive environment in
the Rakhine State for their (Rohingyas) safe, secure and dignified
repatriation.

The high commissioner said that his country always gives priority to
maintain good bilateral relation with Bangladesh and his country’s
cooperation would continue to enhance bilateral tie during his assignment
here.

Secretaries concerned to the President and high officials of the Foreign Ministry were present. Earlier, on their arrivals at Bangabhaban, a smartly turned-out contingent of the horse-mounted President Guard Regiment (PGR) gave the envoys guards of honour as part of the ceremony.
(BSS)