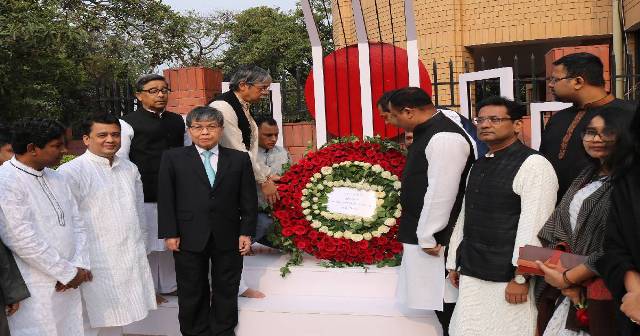 Online Desk : Bangladesh missions abroad observed the Language Martyrs’ Day and the International Mother Language Day on Friday in a befitting manner with a call for upholding the values of 1952 and 1971.

The programmes started with the hoisting of the national flag at half-mast by the heads of missions in presence of officials, foreign guests and expatriate Bangladeshis in respective countries, according to messages received from various missions.

Special prayers were offered seeking divine blessings for the language heroes and Father of the Nation Bangabandhu Sheikh Mujibur Rahman.

The programmes were rounded off with various activities, including rendering of patriotic and Language Movement songs.

UNESCO declared February 21 as the International Mother Language Day in 1999.

Meanwhile, foreign missions stationed in Dhaka also paid tributes to the language martyrs of Bangladesh on the occasion.

Australian High Commission in Dhaka Australia stands committed to its principles of diversity and inclusion in culture and language – the values reflected in the spirit of International Mother Language Day.

British High Commissioner to Bangladesh Robert Chatterton Dickson said, “Language is one of the things that make us human. Everyone has the right to speak in their own language wherever they are in the world.”

As the British High Commissioner, he said, “I am proud, on mother language day to salute the martyrs who gave their lives to speak their own language in 1952.”


On the occasion of International Mother Language Day, US Embassy Dhaka launched their website in Bengali.

Chargé d’affaires Wagner inaugurated the website on Thursday, which will ensure Bengali speakers across Bangladesh and around the world have access to information about US foreign policy, business opportunities, visas for travel to the US, study and professional exchange opportunities in the United States, and more.