Global community for using power of language to solve problems 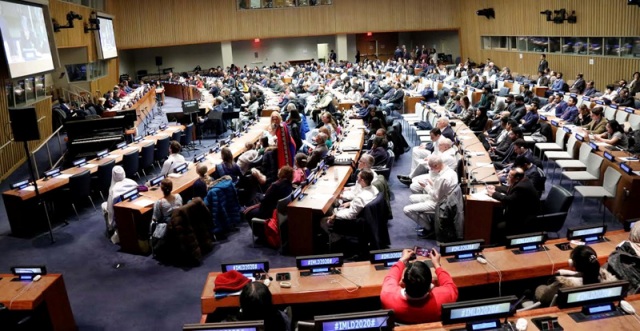 Online Desk : The global community in a function at the United Nations (UN) Headquarters marking the International Mother Language Day urged all concerned to use the power of language for addressing the rise of conflict, intolerance and social tensions.


Attending the event as a special guest, the President of the UN General Assembly Tijjani Mohammed-Bande said: “The UN has clearly provided the lead by underscoring in 2018 that linguistic diversity and multilingualism are a must for sustainable development at this time when many languages are dying at an alarming rate.”

He said the global community must redouble its efforts to promote mother languages.

The Permanent Representative (PR) of Bangladesh to the UN Ambassador Rabab Fatima made the welcome remarks.

She said Bangladesh is the only nation in the world to have shed blood for its mother tongue.

The proclamation by UNESCO in 1999, to observe 21st of February as the International Mother Language Day is the most befitting tribute to the language martyrs who made their supreme sacrifice on this very day in 1952 to protect their mother tongue ‘Bangla’, she added.

And this historic initiative was spearheaded under the leadership of Prime Minister Sheikh Hasina”, said Rabab Fatima.


She paid rich tribute to the Father of the Nation Bangabandhu Sheikh Mujibur Rahman for leading the language movement of 1952 and culminating in our independence in 1971.

Citing the theme of this year’s celebration ‘Languages without Borders’, Ambassador Fatima stated that the power of language transcends borders and serves as a powerful tool to connect different peoples and cultures. She urged all stakeholders to protect languages and cultures, including those facing extinction.

The venue was full to its capacity with the presence of senior diplomats of a large number of member states, UN officials, media personalities and civil society representatives.