President asks military to get ready for supreme sacrifice for nation 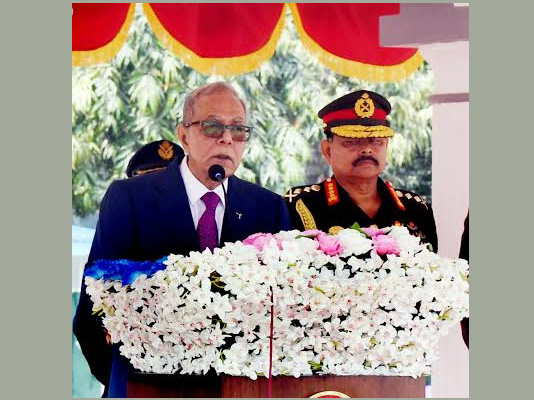 Online Desk : President M Abdul Hamid today asked the members of armed forces to stay ready for supreme sacrifice upholding the dignity of the National Flag as he addressed a flag-giving ceremony of four artilleries at Halishahor Artillery Centre and School here.
“The national flag is the symbol of independence, sovereignty, honour and dignity of a nation . . . It’s a scared responsibility of all soldiers to uphold its dignity. Stay always ready to make supreme sacrifice for it,” he said.

The President, also the commander-in-chief of the armed forces, directed the armed forces to get ready for the best possible sacrifice at the time of emergency, simultaneously, protecting the identity of the motherland.


Speaking on the occasion of awarding the national standard status to 1, 2, 3, field regiment artilleries and 38 air defense regiment artillery here, he said the members of armed forces will have to contribute to the welfare acts for the need of the country and the nation.

In this connection, he recalled the dutifulness and professionalism of the armed forces in establishing world peace through different UN peacekeeping missions, saying that their welfare activities enhanced the image of Bangladesh across the world.

The President said each member of the forces, being imbued with the ideals of Bangabandhu and the Liberation War, would continue their relentless efforts to build “Sonar Bangla” envisioned by Father of the Nation Bangabandhu Sheikh Mujibur Rahman.

Noting that modernization and technology are closely related, he stressed on acquiring necessary technical and professional knowledge by all members to cope with the modern technology.


“A modern, time-befitting and strong military is very essential for any country,” President Hamid observed.

He said the works for modernization, restructuring and expansion of Bangladesh army are on as per the ‘Defense Policy’ framed by Father of the Nation Bangabandhu Sheikh Mujibur Rahman in 1974.

The head of the state said the incumbent government led Prime Minister Sheikh Hasina is working to give the armed forces a modern look to implement the ‘Forces Goal -2030’.

“The incumbent government increased the capacity of Bangladesh Army with the inclusion of modern war weapons, artillery guns and modern infantry gazette to cope with the modern and advanced world,” he mentioned.

Lauding the outstanding contribution of the members of the armed forces to different nation-building activities, Abdul Hamid said apart from this, they also earned very positive image in providing necessary support during the natural calamities, making voters database and assisting the civil administration at the time of emergency.

The President also took salute and inspected the parade at the parade ground here.


After the programme, Abdul Hamid joined a photo session with senior officials and also signed the visitor’s book.

Earlier, Chief of Army Staff General Aziz Ahmed received the President after he arrived at the parade ground.

Members of Parliament, senior officials of the Armed Forces and civil dignitaries, diplomats and secretaries concerned to the President, among others, witnessed the ceremony.
(BSS)