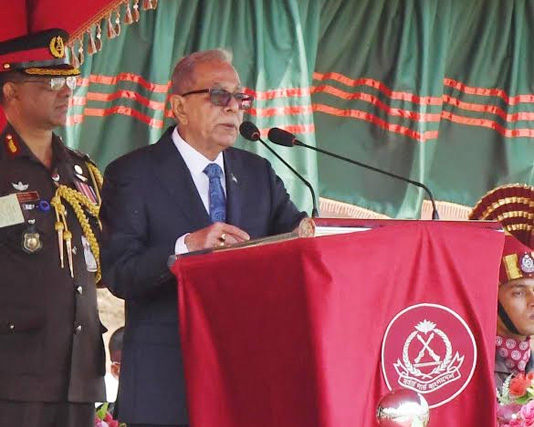 Online Desk : President M Abdul Hamid today asked Border Guard Bangladesh (BGB) to intensify vigilance against cross-border smuggling staying above all sorts of greed and allurement.
“You have to develop strict principle in your character . . . perform duties bestowed upon you properly, staying away from any kind of greed,” he said addressing the passing-out parade of the 94th recruit batch of the paramilitary forces as they wrapped up their 24 week training.

The president simultaneously asked the BGB recruits to shape their career with human qualities and work as per the need of the country and nation to contribute to the welfare activities in days to come. The head of the state recalled that Father of the Nation Bangabandhu Sheikh Mujibur Rahman himself attended the border guards third passing-out parade on December 05 in 1974, when he “directed you to work against cross-border trafficking and smuggling”.


“We must remember that smugglers have no caste, no religion and they aren’t human beings as well . . . They siphon off country’s wealth abroad for a little money,” the President quoted Bangabandhu as saying at that function. President Hamid advised the BGB fresher to work relentlessly with honesty, integrity and showing utmost professionalism to enhance their reputation as watchdogs of the frontier.

He said female soldiers in other forces were performing well and
appreciated BGB decision for inducting women, expecting them to prove their
efficiency and worth as well.

BGB has long 200-year rich history and heritages, Abdul Hamid mentioned,
adding that this force has been serving the motherland since the 1971
Liberation War in many ways.

He said the force stood by people during any crisis like natural disasters
and worked together with common people.


On his arrival at the parade venue, BGB Director General Major General Md
Shafeenul Islam welcomed the President, also the commander-in-chief of the
armed force.

On the occasion, an attractive parade was arranged at Bir Uttam Mujibur
Rahman Parade Ground.

The President took salute, inspected the parade by riding on an open jeep.
BGB Chief Major General Md Shafeenul Islam and Commandant of BGTC and C
Brigadier General Omar Zahid accompanied him there.

A total of 544, including 49 female new recruits, imparted a 24-week
training in the 94th batch which began on September 15 last year.


President Hamid later distributed awards among the best probationary BGB
personnel, cut a cake and joined a photo session as part of the ceremony.