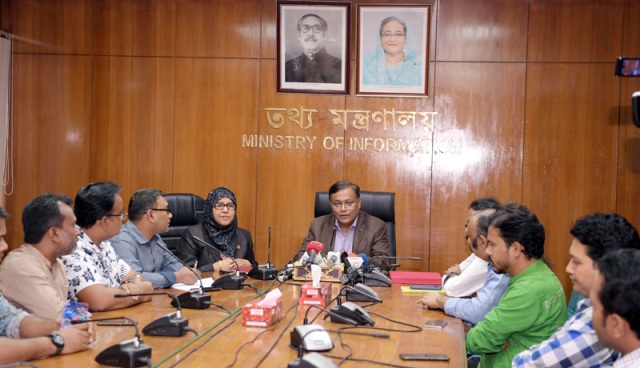 Online Desk : Information Minister Dr Hasan Mahmud today said those who were behind the tragic BDR mutiny should be brought to book through investigation.

“I think the people who plotted the BDR mutiny including BNP chief Begum Khaleda Zia should be brought to justice through investigation,” he told reporters after a meeting with the leaders of Directors Guild at the meeting room of his ministry at Secretariat in the city.

Information Secretary Kamrun Nahar was present in the meeting.

Hasan said BNP Chairperson Begum Zia left her cantonment residence in the early morning on that day (on the day of BDR mutiny) and she talked with her fugitive elder son Tarique Rahman around 40 times. “I think every incident should be investigated. . . why she (Khaleda Zia) left house in the early morning and called her son about 40 times,” he added.


Criticizing a comment of BNP secretary general Mirza Fakhrul Islam Alamgir on BDR verdict and investigation, the minister said BNP always tries to find faults in every incident. “They (BNP) expressed their disagreement over the judgments of Begum Zia and Tarique Rahman. They also threatened to go for movement against the court verdicts. And they are doing these continuously,” he added.

He said the people who were convicted by the court are now in jail. “There are also many questions about the role of BNP chief Begum Khaleda Zia in the BDR mutiny, said Hasan, also Awami League joint general secretary.

Replying to another query about a comment of BNP leader Khandaker Mosharraf Hossain on recently expelled Jubo Mohila League leader Shamima Nur Papia, the minister said there are many intruders and opportunists in the party (AL) as it is in power for three consecutive times.


Many of them (intruders) are linked with misdeeds and they entered the party to utilize it as a political shield, he added.

The minister said a directive has been given to expel those intruders and opportunists from the party after identifying them. “They are only miscreants,” he added.

In the meeting, Hasan said some television channels aired foreign TV serials dubbed in Bangla which was not acceptable. “So, the ministry has issued an order for TV channels to take the government’s approval to broadcast the dubbed serials. A preview committee has also been formed to oversee the matter,” he added.


He said a policy will be made for making advertisements with foreign artistes so the artistes of the country and the industry are be protected. Directors’ Guild President Salahuddin Lavlu and General Secretary SA Haque Alik, among others, were present in the meeting.
(BSS)