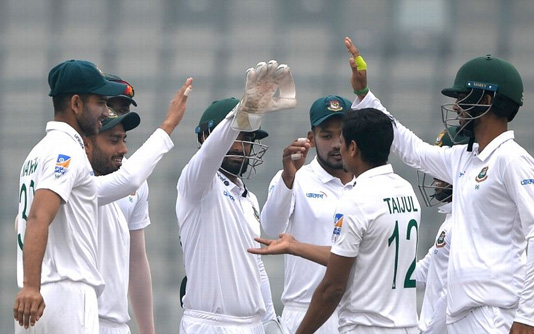 
An innings margin victory however was on the card, when Bangladesh reduced Zimbabwe to 9-2 on day three after Mushfiqur Rahim’s 203 not out helped them to declare the only innings on 560-6. The visitors, who was bowled out for 265 in its first innings, could battle only two sessions of day four before being all out for 189.

Following his 4-70 in first innings, Nayeem claimed 5-82 in this innings and finished the match with his career-best 9-152. A maiden 10-wicket haul in the match could elude him but he wrecked-havoc on the visitors’ batting line up, with ably support from left-arm spinner Taijul Islam, who played second fiddle to him to snare 4-78.


Bangladesh pacer Abu Jayed Rahi, who grabbed 4-70 in first innings and Ebadat Hossain bowled only 9 overs in this innings among Bangladesh’s 57.3 overs. Taijul drew the blood first on fourth day morning when he had Kevin Kasuz caught by Mohammad Mithun at second slip for his overnight 10, leaving Zimbabwe further tittering 15-3 in 11th over.

Brendan Taylor and the stand-in skipper Craig Ervine who scored an excellent 107 in the first innings, had a brief resistance before Nayeem joined the party.


The 20-year old off-spinner undid Taylor with a delivery that carried extra
bounce as the Zimbabwe’s seasoned campaigner’s big sweep resulted in a catch
at midwicket. Taylor made 17 off 47 with one four and a six.

Ervine and Sikandar Raza further combined for a 60-run partnership for the
fifth wicket before the former was trapped run-out by a direct hit of
Bangladesh skipper Mominul Haque from cover.

Ervine smashed six fours and one six in his 49 ball-43 and with his
dismissal Zimbabwe’s hope to avoid at least innings defeat was virtually
over.

Taijul Islam got the better of Raza for 37 before he dismissed Regis
Chakabva for 18.


Timycen Maruma however delayed the inevitable but Nayeem kept striking as
he trapped Ainsley Ndlovu leg-before for 3.

Taijul Islam however wrapped up the game by dismissing Charlton Tshuma for
3, just 10 minutes before the scheduled Tea session of day four.

It was Bangladesh’s first victory under the captaincy of Mominul Haque, who
made the match memorable one with his ninth Test ton, a well-composed 132 in
Bangladesh’s only innings, that saw him level with Tamim Iqbal as the
country’s highest century-maker in this format.