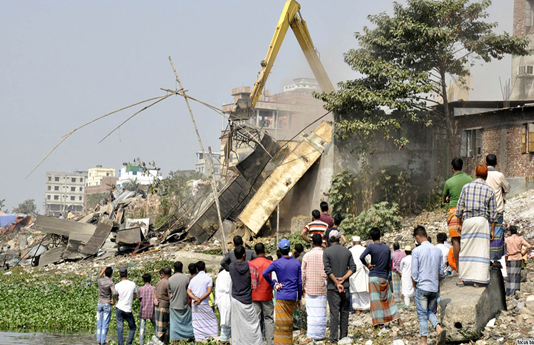 In Khulna division, 1,038 illegal structures were removed from the banks of different rivers, recovering about 40 acres of land. Maximum 250 structures were demolished in Magura district.


In Sylhet Division, 225 illegal structures were demolished from riverbanks, while a total of 800 establishments were removed from rivers in Chattogram, recovering 275 acres of land from occupation, according to the official data.

All district administrations and local offices of the BWDB carried out the drives to demolish structures encroaching small rivers, canals and water bodies. The BWDB has set a target to evict 92,294 illegal structures from the rivers and other water bodies across the country during the drive which began in all 64 districts at the same time.


In Dhaka, the authorities started a drive on the bank of the Ramchandrapur canal in Mohammadpur. Water Resources secretary Kabir Bin Anwar inaugurated the drive. The Ministry of Water Resources is supervising the drive under the first phase of the re-excavation project of small rivers, canals and water bodies in 64 districts of the country.

Speaking at the inauguration ceremony, Kabir said after a year-long effort, all the district administrators have made the list of illegal structures as per the Bangladesh Water Act 2013. He said “To stop re-encroachment, we have a plan to plant trees and build walkways along the canal”.
(BSS)