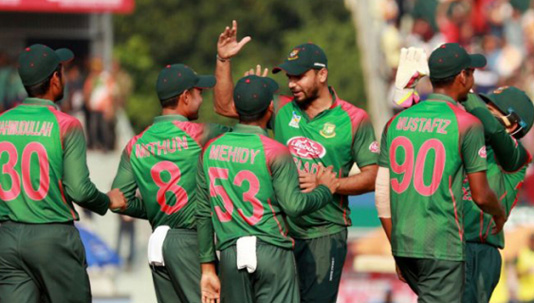 Online Desk : In a bid to prolong their absolute domination over Zimbabwe, Bangladesh will take on the visitors in the first of three-match ODI series at the Sylhet International Cricket Stadium here tomorrow (Sunday). The match starts at 1pm.

The tomorrow’s victory will see Bangladesh take their winning streak over the Southern African nations to a staggering number of 14. And obviously this will be a prelude to their aspiration to complete fourth consecutive whitewash on the visitors.

In fact only four members of the current national team set up-Tamim Iqbal, Mushfiqur Rahim, Mahmudullah Riyad and Mashrafe Bin Mortaza knows how it is like to lose a match against Zimbabwe.


When Bangladesh lost their last match against Zimbabwe, which came in 2013 at Bulawayo, apart from Mashrafe, the rest of the three members were part of that team. The rest of the members of this side even didn’t make their debut in that period.

That was however Bangladesh’s last series in Zimbabwe after which they played all of the 13 matches against Zimbabwe at their home soil. Firstly in Mashrafe’s second stint as captain in 2014, Bangladesh whitewashed Zimbabwe in a five-match ODI series-a significant result that actually kick-started their cricketing renaissance and made them a true cricketing giants in ODI format from a team to show their occasional flashes of brilliance.

They later whitewashed Zimbabwe in two three-match bilateral series in 2015 and 2018 and two more matches in a tri-nation series that also included Sri Lanka in 2018 in Dhaka.

Zimbabwe however still wins a Test and some T20 matches against Bangladesh in this barren period, but the Tigers remained unconquered for them in one-day format, a version in which Bangladesh literally remains far head than the other two formats of cricket.


Moreover when the history is completely in Bangladesh’s favour, the hosts also came off a dominating victory against Zimbabwe in one-off Test in which they grabbed an innings and 106-run margin victory. As the things stand, Bangladesh is going to play the three-match ODI series as absolute favourite.

But still the Bangladesh captain Mashrafe Bin Mortaza, for whom, the series is all likely to be his last as a captain, if not as a player, wanted the players to guard against the complacency.

“We can have the upper-hand over Zimbabwe but in International cricket no team is weaker opponent. They can beat us, and they beat us in other two formats in the recent time, so you can’t take anything for granted,” Mashrafe said ahead of the match.

“As I said earlier, we have to come up with all guns blazing right from the start. The start is in fact very important. We will obviously go match by match. We want to win the first match first and then we’ll think about the second and then if we can win that too, we will obviously go for sweeping the series. Right at this moment, it is absolutely not correct to say that we’ll whitewash them. They are also here to beat us.”


Overall the two sides locked horns for 72 times, the most time Bangladesh played against any team in the world. Amongst those 72 matches, Bangladesh won 44, most of which came after Zimbabwe became a depleted side after 2007. Zimbabwe however won 28 matches.

The first ODI tomorrow will be Bangladesh’s first since July 2019 and so there were many changes in this side from the last side that played against Sri Lanka in a three-match series just after the World Cup. This will be also Bangladesh’s first ODI match under new coaching staffs led by head coach Russell Domingo.

As many as seven players of that team are not in this current team, so there will be lot of changes and also there are some new players like Afif Hossain who looks to make their ODI debut following the excellent T20 performances.


“I don’t know what will be the team combination. The coaching staffs are new and obviously the head coach will try to establish some new players. However we’ll take decision in this regard after the team meeting,” Mashrafe said.
(BSS)