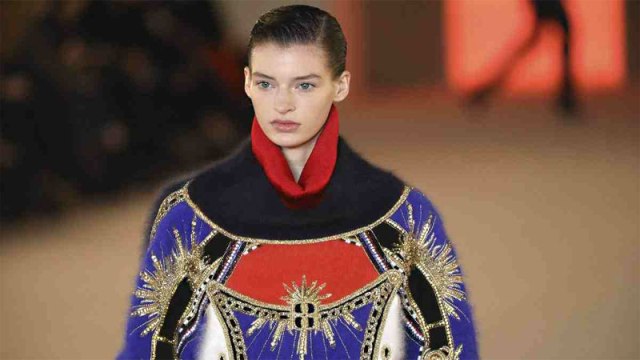 Online Desk : Usher unleashed a photographer’s battle at Balmain on Friday, as he appeared at Paris Fashion Week alongside towering model Cindy Bruna.
The designer, Olivier Rousteing said of the typically glamazon-filled fashion collection, that it was a celebration of his personal journey. Celine, meanwhile, served up a subtle homage to the 1970’s. Here are some highlights of ready-to-wear shows for fall-winter 2020.

An orphan from posh Bordeaux, where doors were closed to him because of his race, Rousteing said he explored how those same doors suddenly flung open when he became a top designer in Paris.

“I learned from an early age that certain classes, clubs and cliques were closed off to someone who looked like me,” he said.

“Many of the codes of a world that was once beyond my reach are key parts of this collection… (that) adapts those symbols of upper-class exclusion and twists them.”

In that vein, in the display, he delivered a street-cred makeover to traditional styles — such as silk scarf patterns, classic equestrian looks and the signature harlequin crisscross patterns — ones executed in cognacs and intense blues on rich fabrics such as jersey.


Rousteing’s passion was evident in the pure exuberance. The show opening included a dozen models in exactly the same look — a chic double-breasted wool coat with the house DNA of six gold buttons. It evoked the mood of an urban gang.There were plenty of hits. A loose pastel brown leather pantsuit hybrid subverted the cinched-waist silhouette of house founder Pierre Balmain’s Jolie Madame look. Instead of a belt there was a clutch bag on its front, resembling a fanny pack. With its thick leather ruffles, it was surely the collection’s best look.

Alas, Rousteing’s exuberance was also what was wrong with the collection, which strayed at times into overkill.

Designer Hedi Slimane put on a refined collection for Celine that was notable for its — relative — understatement.

Oversize black floppy hats followed statement talisman necklaces, sequined dresses with bow collars, ruffles on shirts and, of course, that decade’s staple of brown corduroy pants. They were all styles we’ve seen before on the Slimane-Celine runway.

Yet this season was marked by an added refinement — with a perfect balance to the silhouette.


The statement piece of a cascading layered bohemian skirt that sparkled in black, magenta, artichoke and coral, could have been extreme, but was handled with refinement. It was paired with a simple black bolero-style jacket that allowed the dominant garment breathing space. Giant fur coats were delivered in black, to merge with the model’s pants and create a visual continuity. While, culottes fluttered gently.

The bourgeois codes of the storied house of Celine seem to be having a positive effect on Slimane, the once-wild child of fashion.

They have somehow complemented his love of excess, by slightly reining it in.

Unlike in Milan, on the face of things, the anxieties over the new coronavirus have been imperceptible at Paris Fashion Week — apart from the appearance of an occasional respiratory mask at shows. But there has been a few jitters.

The federation said, in a statement, that it will try to promote the brands online instead and “will make available all its communications platforms to allow these brands to share the work they had planned to present both in France and overseas.”


Added to that, LVMH suddenly canceled Thursday’s cocktail reception to celebrate its 2020 LVMH Prize for Young Fashion Designers, in an email to AP. The event was canceled on the same day that France reported a French citizen on its soil had died from COVID-19. LVMH did not respond to an email asking if there was any correlation. The presentation of the designer’s work, it said, was still going on Friday.

On Friday, Chanel said its U.S. office is not traveling to Paris Fashion Week out of precautions over the virus.

A clean-looking cream carpet covered the Isabel Marant runway. Was it perhaps an indication that the normally boho French designer was moving in a more pared-down aesthetic for fall?

The collection proved this to be true. While not entirely minimalist, it did away with the usual boho froth and frills, and in their place appeared 53 monochromatic and more focused looks that riffed on the 1980s.


Marant’s trademark exaggerated 1980s shoulder still was the silhouette from which the designs hung, ones that were often cinched chicly at the waist. While, floral prints interrupted the monochrome, with flashes of true blue.

The best looks included a gray cape dress that billowed down with a beautiful heavy feel and enveloped the model. While the LBD was made statement with a sexy asymmetrical shoulder.