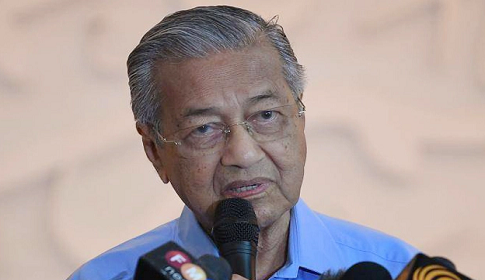 International Desk : Malaysia’s Mahathir Mohamad called Sunday for an urgent Parliament sitting to contest the appointment of a former ally as the country’s next prime minister under a new Malay-majority coalition that could further split the nation following the collapse of his multiracial reformist alliance.Muhyiddin Yassin, a seasoned politician who once famously quipped that he is Malay first and Malaysian second, was sworn in at the palace Sunday after getting the support of several opposition parties. That includes the corruption-tainted United Malays National Organization, which was ousted by Mahathir’s Alliance of Hope in a historic vote in 2018.

Muhyiddin, 72, pulled his Bersatu party out of the alliance on Monday, triggering its collapse.

Mahathir resigned as prime minister in protest of the plan that would bring UMNO back to power. After a week of political turmoil, the king Saturday said he believed Muhyiddin had the majority support of lawmakers and named him the new leader.


But Mahathir’s camp has contested that assertion, saying the 94-year-old two-time prime minister has the backing of 114 lawmakers to return as premier for a third time, surpassing the 112 votes needed for a simple majority.Mahathir said Sunday that the palace has refused to hear him out. He called for an urgent sitting of the lower house of Parliament to test Muhyiddin’s claim of majority support, warning that if this was delayed, his supporters could be induced to support the government of the day.

“We feel we have 114 but after the actions taken by these very rich and very powerful people, we may not have the 114,” he said. “So the test of the pudding is in the eating; hold the Parliament sitting now.”

The house is only due to resume March 9.

Mahathir said he felt betrayed by Muhyiddin’s move and warned that UMNO leaders including ex-Prime Minister Najib Razak, who is facing trial for corruption charges, may get off the hook. UMNO is the biggest party in Muhyiddin’s new coalition.


“The court may find it embarrassing to take action against the government. We have seen this happen before during Najib’s time when he was able to manipulate the court, change the charges and to a certain extent, influence the decision of the court. I believe if the new government is installed now with Najib in it, this is what is going to happen,” he said.

Attorney General Tommy Thomas, who oversaw a slew of graft charges against Najib, his wife Rosmah Mansor and several UMNO leaders after his appointment by Mahathir, has quit. An official from the attorney-general’s office chambers said Thomas tendered his resignation Friday evening and that an an official announcement will be issued next week. The official spoke on condition of anonymity because they were not authorized to speak to the press.

Muhyiddin and Mahathir were former members of UMNO who formed Bersatu in 2016 amid anger over a massive graft scandal involving the 1MDB state investment fund.

Muhyiddin is a longtime politician who served in various ministries during Mahathir’s first stint as premier for 22 years until 2003. He was appointed as deputy prime minister when Najib took power in 2009 but sacked in 2015 after he criticized Najib’s handling of the 1MDB scandal.


Bersatu teamed up with the Alliance of Hope with a pact that Mahathir would eventually hand over power to former rival Anwar Ibrahim. Muhyiddin was the former home minister under the short-lived alliance but only took up the post months later following treatment for pancreatic cancer.

Muhyiddin’s new government, dubbed the National Alliance, has stoked fears of increasing Islamization as it will also bring to power a fundamentalist Islamic party with strong rural support that espouses strict Islamic laws. Ethnic Malays account for 60% of Malaysia’s 32 million people, which includes sizable minorities of ethnic Chinese and Indians.

Many Malaysians expressed outrage on social media over the betrayal of their vote for a change in 2018 polls. The hashtag #NotMyPM was trending on Twitter, and dozens of protesters rallied against what they called the “death of democracy” late Saturday.


“We expect a lot more pro-Malay politics coming from his government,” said James Chin, professor of Asian studies at Australia’s University of Tasmania.

Nevertheless, he said “going forward, what I foresee is that Mahathir will still be (in) the game.”

With Mahathir seeking to move a motion of no-confidence against Muhyiddin in Parliament, Chin said horse trading was expected to intensify as both camps seek to solidify their support.
(AP)