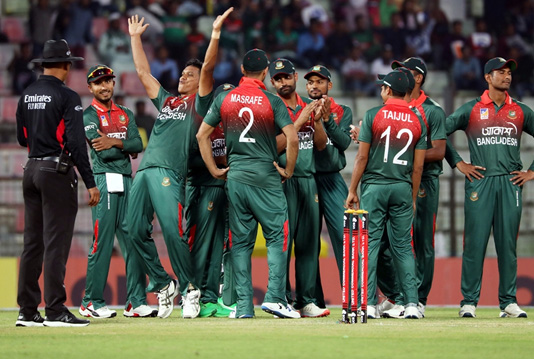 Sports Desk ; A rampant Bangladesh is looking to ensure the three-match ODI series against Zimbabwe with a match to go as they take on the visitors at the Sylhet International Cricket Stadium here tomorrow(Tuesday).
The host’s confidence to seal the series stemmed from their effortless 169- run victory over Zimbabwe in the first match. In terms of runs, it was their largest victory in the one-day cricket history and their 14th consecutive victory against the Southern African nation in a row.

That utter dominating victory, however, came as a relief for the country’s cricket which hit the lowest ebb following some on field performance and off the field drama.


But as an opponent, Zimbabwe though is no match for Bangladesh if their performance is counted. Still, according to Bangladesh skipper Mashrafe Bin Mortaza, it was not easier to play an ODI after eight months gap, whatever the opponent is.

Mashrafe returned to form with bang, taking two wickets that helped him
emulate the likes of Imran Khan, Wasim Akram, Shoun Pollock and Jason Holder
to achieve 100 wickets as captain. By taking those two wickets, he also
completed 700-wicket in all format of cricket including International and
domestic cricket.

If Mashrafe’s performance is pleasing enough, the Bangladesh was happier to
see Liton Das and Saifuddin stand tall. Both of the players are considered as
the vital cog of Bangladesh’s 2023 World Cup plan. While Liton Das blasted a
sublime 126 off 105, his second ODI century before being retired hurt,
Saifuddin dazzled with both batting and bowling, which the team management
wanted from him. The all-rounder made a whirlwind 15 ball-28 not out before
scalping his career best 3-22.


Playing the first match after recovering a back injury, Saifuddin’s
performance was the most sought-after thing for the team management.
Alongside them, Mohammad Mithun played a key role in middle order position
hitting a 41 ball-50.

At the same time, senior players like Mushfiqur Rahim, Tamim Iqbal,
Mahmudullah Riyad got the start but simply couldn’t carry on. But their off
day in the office didn’t matter much as the players to replace them in future
put up the worthy performances in Bangladesh’s crushing start.

However, there was no official practice session for Bangladesh ahead of the
second match but most of the players came for an optional practice. The pre-
match thinking vastly revolved around how they could enhance their
performance more, rather than thinking Zimbabwe comeback.

The visitors may perform badly but will remain confident to level the
series after the arrival of Sean Williams, who is all set to play the second
game. Williams missed the one-off Test and the first ODI due to be with his
ailing wife.


“I think being 1-0 down is mentally tough for the guys. It was
disappointing yesterday in all aspects,” Williams said.

“Having a plan would be a key to move forward tomorrow. Hopefully I can bring a bit of energy and calmness. Craig Ervine is getting there too, so he will be ready to play. Guys like Brendan and Raza play a massive role in our team. Having them firing is going to be extremely important for us.”


While some changes will happen in Zimbabwe squad, Bangladesh is highly likely to field an unchanged side. The second ODI will be the 74th ODI matches between the two sides. Out of last 73 matches, Bangladesh won 45 and Zimbabwe grabbed victory in 28 matches.
(BSS)