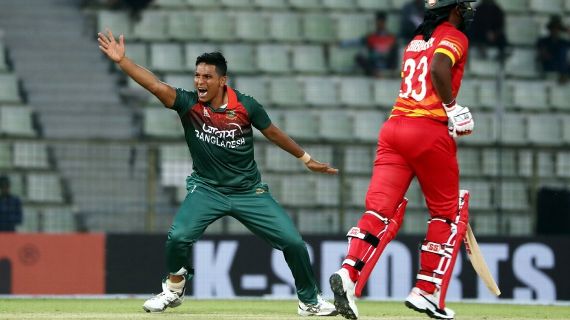 Sports Desk : Shrugging off the poor form and the controversy regarding his batting approach, Tamim Iqbal came up with his ruthless best, as Bangladesh recorded a four-run victory, denying a spirited Zimbabwe to produce a possible upset in the second match at the Sylhet International Cricket Stadium on Tuesday.
Tamim smashed a 136 ball-158, clattering 20 fours and three sixes to help Bangladesh rack up a hefty 322-8 but it was not exact cake-walk like the first ODI in which they sealed a record 169-run victory.


Zimbabwe took the match to the last over and raised a prospect of a miracle, emboldened by a stunning 45 ball-80 partnership by Donald Tiripano and Tinotenda Mutumbodzi for the eighth wicket stand before they were restricted to 318-8.

By doing so, they wrapped up the three-match series, by taking an unassailable 2-0 lead.

The third match, which now turns out to be a dead-rubber, is on Friday at the same venue. Zimbabwe rode on three half-centuries from opener Tinashe Kamunhukmawe (51), Wesley Madhevere (52) and Sikandar Raza (66) to prevent them from tasting a collapse like the first ODI. And that actually gave Tiripano and Mutumbodzi an opportunity to go for ultimate kill.

Zimbabwe’s dream to stay alive in the series looked all over when Mashrafe Bin Mortaza removed Sikandar Raza in the 42nd over.


But Mutumbodzi and Tiripano made a stunning comeback, leaving Bangladesh in disarray with powerful shots around the ground. They however needed 20 runs off the last over.

Bangladesh clawed back with the wicket of Mutumbodzi for 34 off 21 in the second ball of the last over. But drama unfolded again when Tiripano struck consecutive two sixes off Al-Amin to reduce the margin to 6 off 2 balls.

Al-Amin made a dot in the penultimate ball, leaving Zimbabwe require of 6 runs off the last ball. However Tiripano managed to take a single in the last ball, giving Bangladesh some comfort at the end.

Tiripano was not out on 55 off 28, smacking two fours and five sixes.

Earlier, Tamim 12th century gave Bangladesh a hefty total. His 158 was the highest individual knock by a Bangladeshi batsman in the one-day format, eclipsing his own 154 against the same opponent in Bulawayo in 2009. No other Bangladeshi batsman hit a single 150 plus knock in this format with the second best 144 came from the willow of Mushfiqur Rahim and Imrul Kayes. During the knock, he also reached 7000 runs mark as the first Bangladeshi batsman.

Mashrafe Bin Mortaza won the toss yet again and opted to bat first without any hesitation.

Tamim who was often blamed not to try to pace the innings in the first power-play took the anchor role and paved the platform of 322, their highest total against Zimbabwe, going past the 321-6 in the first ODI, in which they won by a record 169-run margin.


Tamim’s epic knock was complemented by Mushfiqur Rahim’s 50 ball-55, studded by six fours. Mahmudullah Riyad made 41 while Mohammad Mithun blasted an unbeaten 32 off 18 with three fours and one six to help the team’s cause.

But Tamim was the reason to inflict run out on his fellow opener Liton Das (9) and Nazmul Hossain Shanto (6). He however amended those two dismissals with a power-packed batting to give Bangladesh high flying start.

Mushfiqur joined him and the duo added 87-run for the third wicket stand to lay a solid base.

Wesley Madhevere got the better of Mushfiqur for 55 but Tamim remained unscathed.

He got another ably support in Mahmudullah Riyad with whom he combined for a 106 off 100 balls to take Bangladesh closer to 300. Mahmudullah got dismissed by Charlton Tshuma after hitting three fours in his knock.


Tamim by then completed his 150 before one shot too many caused his dismissal. By then he struck 20 fours and three sixes in his 136 ball-158 runs knock.

Mithun however drove the side past 300 amid the wickets falling around him.