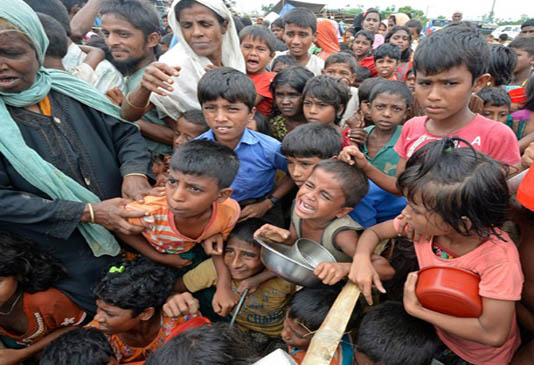 Online Desk : Bangladesh has welcomed the international community as the United Nations agencies and NGO partners today launched 2020 Joint Response Plan (JRP) seeking 877 million US dollars for the need of Rohingyas as well as host community in Bangladesh.

State Minister for Foreign Affairs Md Shahriar Alam thanked the international community for their continued support for the consecutive Joint Response Plans since Rohingya influx in 2017.

“The international community, including the UN agencies, must work towards meaningfully and vigorously engage with the government of Myanmar to create an environment that would be conducive to voluntary, safe, dignified and sustainable return,” he said at the launching ceremony of this year’s JRP in Geneva, according to a message received here.


Many UN member countries as well as by international organizations attended the event, organized by UNHCR, IOM and OCHA.

During the event, three countries immediately pledged to contribute to JRP – 59 million US Dollar by USA, 22 million Euro by the European Union and 65 million Swedish Krona in Sweden.

Providing an overview of efforts by Bangladesh government for ensuring unhindered humanitarian assistance to the Rohingya, Shahriar underscored that the only durable solution of the prolonged crisis is the safe and voluntary repatriation of the Rohingya to their places of origin.

However, he said the progress toward repatriation still deserves due attention.

“Myanmar authorities have an obligation to create a conducive environment in Rakhine State for repatriation and the international community including the UN has a responsibility to play a role in this regard,” he said.


The State Minister apprised the audience of the Bangladesh policy to allow education for Rohingya children in Myanmar curriculum and language to get them prepared for their eventual reintegration into Myanmar society and urged on the international community to actively engage Myanmar to reap the essence of the initiative.

The government of Bangladesh will continue to engage the UN agencies and other international community to relocate some of the Rohingyas from the disaster-prone area of the camps to Bhashan Char, he added.

During their interventions of the launching event, the USA, Switzerland, Australia, Malaysia, Thailand, the UK, Japan, Canada, Denmark, Netherlands, Norway, Sweden, Germany, Turkey and Ireland, as well as UN and other international organizations like the EU, ADB, OCHA, OIC, UNFPA, ILO) highly lauded the continuous support of Bangladesh government including allowing education in particular


In their statements, many delegations expressed their support for justice and accountability approach of Rohingya atrocity and addressing root causes affirming that ultimate solution lies with Myanmar.

The state minister also had a bilateral meeting with the UN High Commissioner for Refugees Filippo Grandi.


Ambassador M Shameem Ahsan, Bangladesh’s Permanent Representative to the UN Office in Geneva, and DG, United Nations Wing, Ministry of Foreign Affairs Samia Anjum were present as the members of the Bangladesh delegation at the launching event.
(BSS)