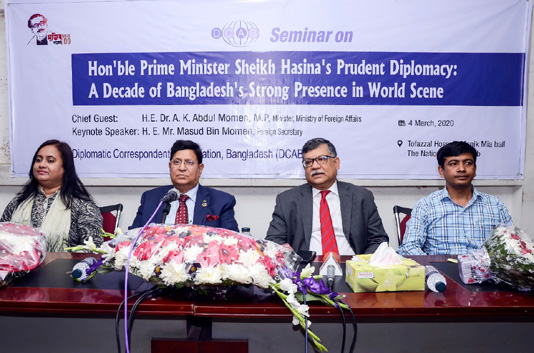 Online Desk : Foreign Minister Dr A K Abdul Momen today said Dhaka wants to brand image of economically emerging Bangladesh anew across the world by celebrating “Mujib Year” and “Golden Jubilee” of the country’s independence globally.
“We would like to brand image of Bangladesh anew as a land of opportunity with vibrant economy by wiping off the old image of disaster prone and poverty-hit country,” he told a seminar at Jatiya Press Club here.


The foreign minister termed this and next years as the golden era of Bangladesh diplomacy, as it’s an opportunity for Dhaka to build a strong positive image of Bangladesh worldwide by taking advantage of highly cherished global image of Bangabandhu as well as celebrating the country’s 50 years anniversary.

Momen said the government has laid importance on economic diplomacy as the country achieved tremendous financial growth in last one decade due to pragmatic leadership of Prime Minister Sheikh Hasina.

“We are visiting different countries with our prime minister to get more business and foreign investment here,” he said, adding, along with that the foreign ministry is building up a network with Bangladeshi expatriates those can contribute to the country’s economy immensely.


Apart from economic diplomacy, Momen said Bangladesh is now giving focus on public diplomacy as well. “We have established Bangabandhu foundation in 33 countries to enhance our diplomacy in the public front,” he added.

In his keynote paper, Masud said Bangladesh’s current diplomacy under the leadership of Prime Minister Sheikh Hasina is evolving with the Bangladesh’s core motto of diplomacy – friendship to all malice towards none – set by Bangabandhu.

“Even though, currently Bangladesh is showing interest in the much-talked Indo Pacific Strategy,” he added.