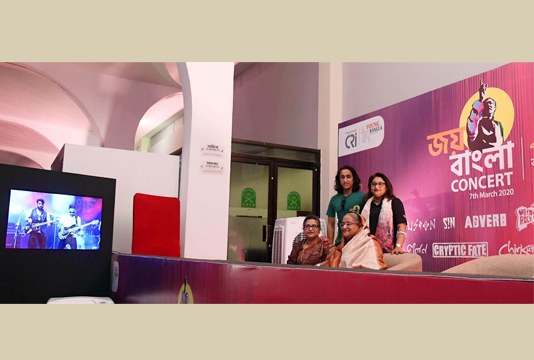 Online Desk ; Prime Minister Sheikh Hasina joined the annual Joy Bangla Concert that began in the afternoon at the Bangladesh Army Stadium with the playing of national anthem to rekindle the historic 7th March speech of Bangabandhu.

Radwan Mujib Siddiq Bobby, son of Sheikh Rehana, was with the Prime Minister, he said.

Graphical representation on Bangabandhu’s iconic March 7 speech and the great Liberation War was screened in the evening.

Later, the leading bands of the country Cryptic Fate, Nemesis, Fuad and Friends, and Chirkut appeared on the stage to enthrall the audience with their dazzling performance.

Like the previous years, the band groups enchanted the audience by performing songs of the Swadhin Bangla Betar Kendra as well as their own songs.

Young Bangla, an initiative of the CRI and a leading youth network of the country, is hosting the mega event every year since 2015 to revive the spirit of Liberation War among young generation.

The concert will continue till 10pm. The entry gates of the venue were closed after 4pm.

As many as 46 thousand viewers registered online to enjoy the concert besides a huge number of spectators will enjoy it on television sets or online.


This year, the event gets a different dimension as the nation is going to celebrate “Mujib Borsho” (Mujib Year) from March 17 marking the birth centenary of Father of the Nation Bangabandhu Sheikh Mujibur Rahman.
(BSS)