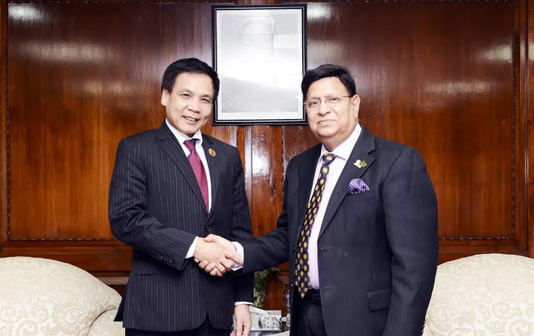 He urged Vietnam to play a crucial role in resolving the Rohingya crisis with its current capacity as a non-permanent Member of UN Security Council as well as the current chair of the ASEAN (Association of Southeast Asian Nations), the same platform also shared by Myanmar.


Momen made the urge while newly appointed Vietnamese Ambassador to Bangladesh Pham Viet Chien called on him at foreign ministry here. In reply, the Vietnamese envoy assured Bangladesh of his country’s all-out support on the Rohingya issue.

Momen said the present government attaches utmost importance to Bangladesh’s relations with Vietnam and is determined to take bilateral ties to a new height. The Foreign Minister noted that Bangladesh-Vietnam two-way trade is not up to the actual potentials.

He suggested that Vietnam can procure from Bangladesh some unconventional items such as bicycles, light engineering products, pharmaceuticals, agricultural products particularly jute and jute products.

He sought Vietnam’s investments in the Special Economic Zones and Hi-tech Parks where attractive incentive packages are offered to the foreign investors while the rate of return through investment in Bangladesh is one of the highest in the Asian region.


Momen noted that the common people of Bangladesh hold the freedom-loving people of Vietnam and its legendary leader Ho Chi Minh in high esteem. The Ambassador was highly appreciative of the tremendous development taking place in Bangladesh in the last one decade under leadership of Prime Minister Sheikh Hasina.