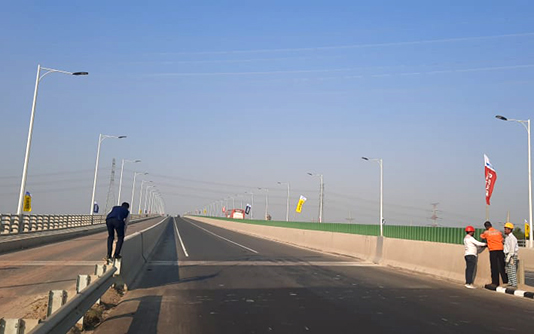 Online Desk : The country’s communication sector is set to enter into a new era on the eve of “Mujib Borsho” (Mujib Year) as its first- ever expressway on Jatrabari-Mawa-Bhanga route will be opened to traffic tomorrow.

Prime Minister Sheikh Hasina will formally inaugurate the newly- constructed expressway through a videoconference from her official Ganabhaban residence here tomorrow. The 55-km long expressway having all the modern facilities was constructed aiming to reduce travel time as well as to ensure smooth and comfortable journey of the people of 22 southwestern districts.


Officials familiar with the project said the international standard expressway having two service lanes will connect the country’s southwestern part with the capital. “It’s an amazing expressway, which will save travel time and facilitate smooth and uninterrupted vehicles movement”, a local transport driver told BSS.

According to the project details, the expressway has five flyovers, 19 underpasses as well as some 100 bridges and culverts, which will contribute to the national economy by boosting trade and commerce in the country. It has two parts stretching 35-kilometre long from Jatrabari intersection to Mawa and 20-kilometre long from Pancchar to Bhanga.

The world standard expressway is expected to contribute significantly to the overall development of the entire Khulna and Barishal divisions and a part of Dhaka division as it will strengthen connectivity between the Dhaka city and the country’s Southwestern part, officials said.


The two parts of the modern expressway will be connected through the 6.15- kilometer long Padma Bridge, which is now under construction. The four-kilometer of the main structure of the country’s longest Padma Bridge has already been visible after the installation of its 26th span on Tuesday. The government has a plan to open the long-awaited bridge to traffic by June 2021.

When the construction works of Padma Bridge will be completed, it will take hardly one hour to get to and from Bhanga to Dhaka. The expressway has been constructed on Dhaka-Khulna highway with an estimated cost of Tk 11003.90 crore taking the growing traffic volume into consideration for the next 20 years on this highway.

The Roads and Highways Department and Bangladesh Army jointly started the implementation of the expressway project in four districts –Dhaka, Munshiganj, Madaripur and Faridpur– back in 2016. The scheme was completed three months before the stipulated time frame of June 2020.

Now the expressway is going to be opened for traffic on the eve of the Mujib Borsha (Mujib Year) celebration which will begin on March 17, marking the birth centenary of Father of the Nation Bangabandhu Sheikh Mujibur Rahman.


Two service lanes have been kept on both sides of the expressway for local and slow-moving vehicles so that speedy vehicles can ply the road uninterruptedly and thus cut down the travel time for long-distance travelers.

There is a 2.3-km Kadamtali-Babu Bazaar Link Road Flyover among five flyovers under the expressway project. Other four flyovers are in Abdullahpur, Srinagar, Puliabazar and Maligram.

Visiting the Jatrabari-Mawa part of the expressway yesterday, this BSS correspondent found that the workers were giving final touch to the world- class highway on the eve of the formal opening. Mohammad Masud, the owner of roadside Nirala Restaurant near Mawa, said now it takes 30-40 minutes instead of previous two hours to travel to Dhaka from Mawa due to the expressway.


“The buses and trucks can move speedily as there is no traffic congestion on the expressway,” he said, adding that earlier it took 30 to 60 minutes to cross the Postagola railway crossing, but now it takes just only few seconds.

“The people especially patients can easily avail quality healthcare services from the capital in a short time as the travel time will decrease for the expressway. Many people now want to build houses and other establishments in our area due to rapid communication advancement,” he said, hoping that this area would turn into a tourist spot.


Arif Chowdhury, a British Bangladeshi citizen who is currently in Dhaka, has visited the expressway. “It’s amazing. I can’t believe it. It seems to me that I am somewhere in the UK. The quality and beauty of this expressway gives me a proud feeling,” he said.
(BSS)