PM urges all to properly follow directives on coronavirus 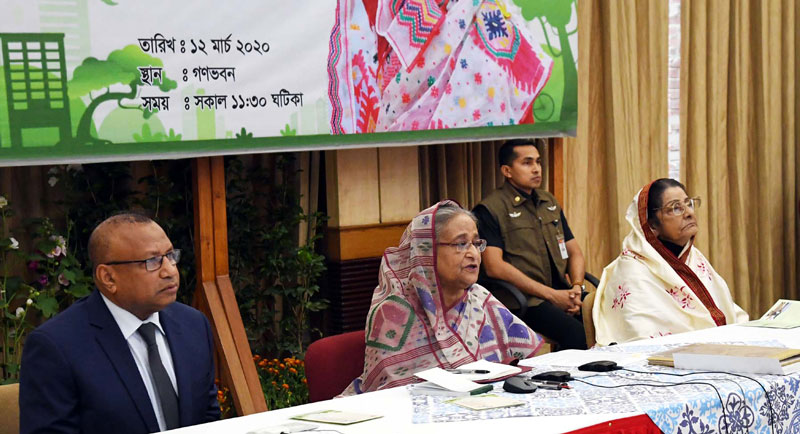 “A panic has been created worldwide due to the outbreak of coronavirus. Though the deaths caused by the disease are not so many, (the extent of) panic is huge. So we’ll have to properly follow the instructions about the deadly disease to keep the country free from it,” she said.

She said the Institute of Epidemiology, Disease Control and Research (IEDCR) is frequently disseminating bulletins to make the people aware on the coronavirus.

“All will have to abide by the directives (of the IEDCR), and then we’ll be able to protect the country from the onslaught of the virus,” the premier said.


Urging the people to always remain neat and clean, Sheikh Hasina said Bangladesh is a victorious nation which earned independence though a liberation war.

“As a victorious nation, we want to move on the world stage by raising our head high. To achieve the goal, we’ll have to build the country beautifully and for this, cleanliness is necessary for all,” she said.

Sheikh Hasina said the country some times witness problems like the menace of dengue and other diseases.

“We launched the cleanliness drive to create mass awareness on this issue … we want the people of the country always to lead a healthy life,” she said.

The prime minister said the World Health Organisation (WHO) has declared that the coronavirus broke out as a pandemic across the globe.

“Bangladesh is still better regarding the disease and there is nothing to be worried. But we’ll have to be more careful to stay well,” she said, urging the people to refrain from shaking hands and hugging with others.

She went on saying: “It’s our desire that we’ll remain careful and make others aware (about the disease) … we’ll also keep our own village, soil and country beautiful and neat and clean and I also want that everybody will abide by these things.”

Sheikh Hasina said two Bangladeshis who returned from abroad were detected with coronavirus or COVID-19. They are now quite well after treatment and one more was infected from them.

She said the rest of the people of the country remain well. “But it’s not enough, we’ll have to keep all well,” she said.

The prime minister said the virus broke out in 114 countries across the world and the government is making all-out strides to prevent the deadly disease.

“If anybody thinks he or she is infected by the disease, then he or she will have to instantly seek advice of the physicians instead of hiding it,” she said.


Sheikh Hasina said the government has kept ready the hospitals up to the upazila and district levels to treat the coronavirus-affected patients.

The prime minister requested the people who returned from abroad not to be close with others immediately.

Pointing out that the people of the country are very little conscious about health, the prime minister urged them not to spit here and there.

“Please don’t spit here and there, in this case you can use handkerchief or tissue paper and after using tissue, keep it at a specified place of wastes. Then the wastes will not spread and the menace of diseases will not be seen,” she said.

Sheikh Hasina advised the people to wash hands immediately after their return home. “It’s better to wash hands with soaps,” she said.

The prime minister urged the people to keep neat and clean their respective houses, offices, kitchens and surrounding areas. “Don’t wait for others to do this work and there is nothing shameful to do own work yourselves,” she said.

Sheikh Hasina said the students of schools, colleges and universities will have to remain neat and clean. “They’ll have to keep in mind that it’s their own work and responsibility,” she said, adding the people who live abroad do their work themselves.

The prime minister suggested the people to keep neat and clean the buses, private cars, launches, rails and aircraft when they travel by these modes of transports.

She said there is a trend in the people to drop packets of foods outside the buses when they travel. “It’s not right at all. In this case, I’ll tell that there is a need to keep a specific place at the bus and launch for keeping the wastes,” she said.

Sheikh Hasina said all wards, unions, upazilas, districts and divisional cities will have to be kept neat and clean and the wastes of these areas will have to be deposited at specific places.

In this regard, the prime minister asked the health ministry to be more aware about the issue and take steps accordingly.

At the outset of his speech, she extended greetings to the countrymen on the occasion of the Mujib Borsho.

“Father of the Nation Bangabandhu Sheikh Mujibur Rahman liberated the country with an aim of presenting a beautiful and better life to every person of the country and we’re running the country to materialise his dream,” the premier said.

“We want Bangladesh to be built as a developed and prosperous country and none will see Bangladesh anymore in the eyes of neglect and the country will advance further by keeping up the honour it now gets worldwide,” she added.

Leader of the Opposition in Parliament Begum Raushan Ershad spoke on the occasion.


She asked all concerned to make necessary measures to recycle the wastes into gas likewise Jeshore as it can also be used as one of the income sources of the local government bodies.

Sheikh Hasina said her government has been working to modernize the city corporations and asked the mayors to keep their localities neat and clean.
(BSS)