US for mounting more pressure on Myanmar for Rohingya repatriation 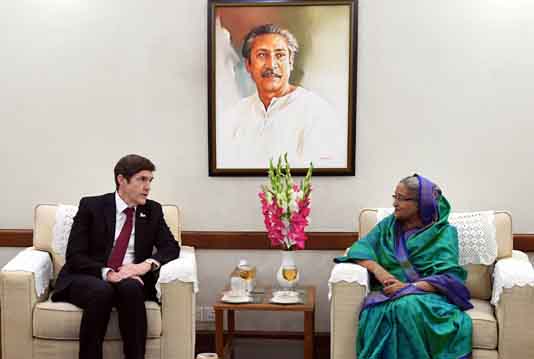 Online desk : US Ambassador in Dhaka Earl Robert Miller today called for mounting more pressure on Myanmar to take back its Rohingya nationals from Bangladesh.

“More pressure should be created on Myanmar to take back its nationals from Bangladesh,” he said.

The US ambassador expressed this view when he paid a courtesy call on Prime Minister Sheikh Hasina at her official Ganabhaban residence here this evening.


He said the US envoy highly appreciated the generosity of Prime Minister Sheikh Hasina for hosting over 1.1 million forcibly displaced Rohingya nationals in Bangladesh.

The press secretary said the prime minister and the US ambassador also discussed the issue of novel coronavirus outbreak that had spread across the globe.

In this connection, Sheikh Hasina apprised Miller of her government’s precautionary measures to combat the lethal virus.

At the outset of the meeting, the US ambassador extended his warm congratulations to Prime Minister Sheikh Hasina on the occasion of the “Mujib Year”.

He said the US embassy will celebrate the birth centenary of Bangabandhu by holding separate programmes.

The prime minister said the government has revised the birth centenary programmes in view of the coronavirus outbreak.

Sheikh Hasina said the government has taken various social programmes, including tree plantation, on the occasion of the Mujib Year.


The US ambassador presented an album to the prime minister which contains the photographs of the meeting of Bangabandhu and the then US President Gerald Ford during the Father of the Nation’s visit to the USA in 1974, the press secretary said.

Sheikh Hasina thanked the ambassador for presenting the album and also conveyed her regards to the US president through the envoy.

Earlier, Alexey Likhachev, the director general of ROSATOM, the State Atomic Energy Corporation of Russia, paid a courtesy call on the prime minister at the same place, the press secretary said.

He apprised the premier of the progress of the construction of Rooppur Nuclear Power Plant.

Likhachev said that if any problem arises in the plant in future it would be solved with the cooperation of the Bangladesh government.


He thanked the Bangladesh government and the Bangladesh embassy in Moscow for extending excellent cooperation to his company in constructing the Rooppur Nuclear Power Plant.

In this connection, Sheikh Hasina put emphasis on imparting training to local technicians by ROSATOM, terming it very much essential for them.

“Training is very much important for the local technicians as they have no prior experience in this regard,” she said.

The prime minister recalled with gratitude the contributions of the then Soviet Russia to the Liberation War of Bangladesh as well as building the war-ravaged country after independence.

“Russia always extended its support to Bangladesh in international forums,” she said.

The ROSATOM director general extended his warm congratulations to the prime minister on the eve of the birth centenary of Father of the Nation Bangabandhu Sheikh Mujibur Rahman.

“It’s a letter from the heart and we want to build a real strategic partnership with Bangladesh,” he said.


Henri Levy, who participated in Bangladesh’s liberation war, told the premier: “I’ve talked to our president Emmanuel Macron and he is impressed with your patriotism.”

The French intellectual said he has come to Bangladesh to be part of the birth centenary celebration of Bangabandhu.

Henri Levy, who was a member of the International Brigade, recalled that he moved with the Indian army in Bangladesh during the liberation war.

The French intellectual also said he is keen to make a documentary on Bangladesh.


She suggested collecting information about the martyrs of the liberation war as much as possible for realising the recognition of genocide in 1971.