President asks new generation to go by ideals of Bangabandhu 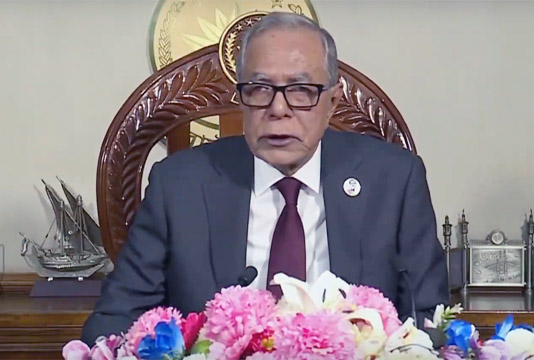 Noting that Bangabandhu was the symbol of the principle and ideology, Abdul Hamid said his books, including ‘Unfinished Memoirs’ and ‘Prison Life’ would help new generation know about the life and works of Bangabandhu.


Being imbued with the ideal of the Father of the Nation, he categorically said the young generation would contribute to nation-building in days to come.

The principles and ideals of Bangabandhu should be spread from generation to generation and the young generation would be courageous and dedicated, the President hoped.

He said the ‘Mujib Barsha’s pledge should be to continue united efforts, being imbued with the spirit of the Liberation War, to complete the unfinished tasks of the Father of the Nation and turn the country into a “Sonar Bangla”.

At the very outset of his speech, the President paid a glowing tribute to Bangabandhu, the greatest Bangali of the thousand years, and simultaneously thanked countrymen and expatriate Bangladeshis to celebrate the birth centenary of Bangabandhu amid festivity and joyous manner in Bangladesh and all Bangladesh missions abroad.

Born on March 17 in 1920 at Tongipara of Goplagang, the President said, country’s founding father Sheikh Mujibur Rahman was an ephemeral great man and from his childhood he was extremely humane but uncompromising on attaining the rights.

In the early forties of the last century, as a young student leader, having come into contact with Huseyn Shaheed Suhrawardy, Sher-e-Bangla A K Fazlul Haque and Moulana Abdul Hamid Khan Bhasani, Bangabandhu got involved in active politics, he mentioned.

Recalling his long successful political career, President Hamid, a very close aide of the Father of the Nation, said Bangabandhu led all democratic and freedom movements, including Sarbodolio Rashtrobhasa Sangram Parishad (All Party State Language Action Committee) in 1948, Language Movement in 1952, Jukta-Front Election in 1954, movement against Martial Law in 1958, Six-Point Movement in 1966, Mass Upsurge in 1969 and General Elections in 1970.


He continued the great leader was sent to jail several times and had to bear inhuman sufferings for his active participation in those movements. Despite manifold challenges, he did never compromise with the Pakistani rulers on the question of establishing the rights of Bengalis, Hamid added.

Referring to the 7th March Speech at the then Race Course Maidan, he said how an address can arouse the whole nation and inspire the people to leap into the War of Liberation for independence, the historic March 7 speech by Bangabandhu is a unique example.

The President said UNESCO has recognized the 7th March Speech of Bangabandhu as part of the “World’s Documentary Heritage” and included it in the “Memory of the World International Register” on October 30, 2017 while the Newsweek Magazine in its April 5, 1971 issue termed Bangabandhu as the “Poet of Politics” for this historic address.

On the black night of March 25, he said, when Pakistani invaders swooped on the innocent and unarmed Bengalis, the Father of the Nation proclaimed the long-cherished Independence on 26th March in 1971.


“We achieved ultimate victory on December 16, 1971 through a nine-month armed struggle under the leadership of Bangabandhu,” the President said.

Bangla, Bangladesh and Bangabandhu have become a common entity for his outstanding contribution to the country and its people, President Hamid observed.
(BSS)