Vow to bring smiles on faces of distressed: Sheikh Rehana 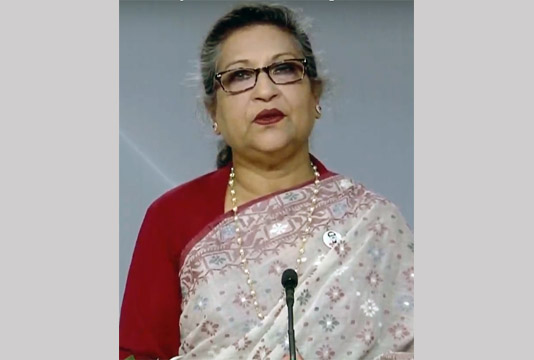 Online Desk : Sheikh Rehana, younger daughter of Father of the Nation Bangabandhu Sheikh Mujibur Rahman, today urged all to take a vow to bring smiles on the faces of the distressed people and build a beautiful and prosperous country.

“Today is the birth centenary of our dearest and the greatest Bangali of all time Father of the Nation Bangabandhu Sheikh Mujibur Rahman. Let’s take a pledge together on this day that we’ll bring smiles on the faces of the distressed people through whatever we have,” she said in a message on the occasion of the inauguration of birth centenary celebration of Bangabandhu.


She added: “Let’s take a vow to build a beautiful and prosperous country free from poverty, corruption and illiteracy. We’ll love Sonar Bangla and refrain from envy,” she said.

Sheikh Rehana said, “We will spread the light of Bangabandhu by building fortress of his ideals at every house. None could suppress us”.

On the occasion of the birth centenary of the Father of the Nation, she recalled with due respect “Ratnagarva maa” (mother of distinguished children) of Bangabandhu Sayera Khatun, his father Sheikh Lutfur Rahman and his dearest better half Renu (Sheikh Fazilatunnesa Mujib), who was with him forever in happiness, sadness and even during death.

“We find the instance of sacrifice in his book ‘Asamapta Atmajiboni’ that how much a person can sacrifice for the country and its people”.

Sheikh Rehana said Bangabandhu did not bow down to any injustice and was refrained from greed, luxury and enjoyment.


“He (Bangabandhu) didn’t compromise. Only ensuring welfare for the people pervaded his thought and belief,” she said.

Noting that such people hardly appear in the earth, Bangabandhu’s daughter said, “Even if they come, they don’t last for long. My father is no more among us. (But) he remains in the hearts of crores of people.”

Sheikh Rehana called upon all to pray for eternal peace of departed soul of Bangabandhu. “Let’s pray by raising our hands so that Almighty Allah grants him Jannat,” she said.

At the outset of her speech, she extended greetings to all on the occasion of the birth centenary of Bangabandhu.
(BSS)