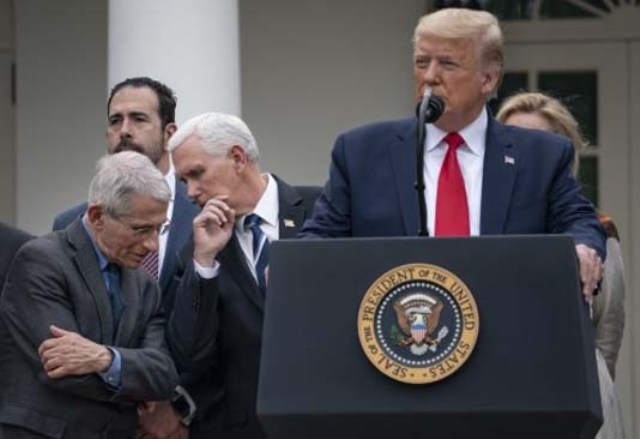 International Desk : US President Donald Trump on Tuesday called for a unified national response to the coronavirus threat, after coming under fire for downplaying the pandemic and allowing states to go their own way.

Trump’s call came as Treasury Secretary Steven Mnuchin said the White House was presenting a massive economic stimulus plan to Congress and was looking at sending direct payments to all Americans, as well as aid to embattled airlines, reports AFP.

Bringing home that nobody is immune to catching the virus, one of the world’s most high-profile athletes, National Basketball Association star Kevin Durant, reportedly confirmed he tested positive.


In a White House appearance that was striking for its mostly measured and sober tone, Trump praised the Democratic governors of New York and California — whom he has frequently tangled with — and excoriated states that were not adhering to strict new guidelines on social distancing.

The number of US cases has surged to almost 6,400, according to a tracker maintained by Johns Hopkins University, with 100 deaths according to an AFP tally.

The outbreak has spread to all 50 US states after West Virginia confirmed its first case Tuesday.

Those figures seemed to be driving a sense of urgency as schools close their doors, businesses shift to teleworking and hospitals prepare to meet a wave of expected patients.


Trump has been repeatedly accused of underplaying the pandemic, particularly in its early stages, in order to avoid spooking the markets.

But he no longer appeared to be using that playbook and hailed a markedly improved feeling of bipartisanship.

“There’s been a lot of spirit with things happening that I haven’t seen in almost three and a half years.”

The US Centers for Disease Control and Prevention (CDC) on Monday issued new guidelines to be followed for up to two weeks, advising against gatherings of more than 10 people and urging against visiting public spaces like restaurants or gyms.

That led to criticism of public officials who had just days earlier called for people to go about their daily lives — including Oklahoma Governor Kevin Stitt and Californian congressman Devin Nunes, both Republicans.

A top coronavirus task force official, Deborah Birx, said: “We believe that every mayor and every governor should implement these guidelines that came from the White House and the President of the United States.”


The US epidemic had been centered on northwest Washington state, but new figures give New York state the highest number of cases with almost 1,400.

Asked his views on when the national epidemic was set to peak, Anthony Fauci, the head of infectious diseases at the National Institutes of Health, told reporters at the White House that 45 days “is not unreasonable.”

He said the taskforce would evaluate if even more draconian measures were required in the next two weeks.

And he called for young people to play their part by remaining at home even if they themselves were not particularly vulnerable to the illness.

Trump’s administration is drawing up a massive emergency spending package while the Federal Reserve has opened the floodgates of financing to contain the growing economic damage from the coronavirus pandemic.

Twice on Tuesday it announced new credit facilities. The latest will provide funding for up to 90 days to major financial institutions known as primary dealers, the Fed said.

Earlier Tuesday it unveiled a facility to help households and businesses stay afloat.


The president called for bipartisan support for rushing out immediate cash payments to American families.

Treasury Secretary Steven Mnuchin said the emergency spending measures could surpass $1 trillion, in addition to $300 billion in deferred tax payments — far greater than during the global financial meltdown that began in 2008.

While Tuesday’s appearance by the president signaled a shift in rhetoric — there was one area where he remained particularly combative, still referring to the pathogen as the “Chinese virus” despite objections from Beijing.

“It did come from China, so I think it’s very accurate,” he said, indicating it was payback for a Chinese disinformation campaign that called the virus a US bioweapon.


Durant, of the Brooklyn Nets, is reportedly one of four players from the team who tested positive.“We’re going to get through this,” The Athletic website quoted him as saying.